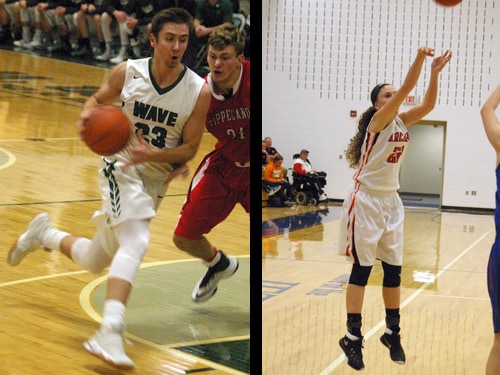 DARKE COUNTY – Two of Darke County’s most prolific scorers on the basketball court are this week’s Daily Advocate athletes of the week.

Gable leads all Darke County basketball players and is second in the Greater Western Ohio Conference with 23.8 points per game. The Green Wave senior has scored more than 20 points in each of his team’s first four games.

“It’s not like we have to go out there and try to manufacture points or call out plays (for him),” Greenville boys basketball coach Kyle Joseph said. “He can get that in the flow of our offense.”

Gable had his first double-double of the season on Tuesday at Piqua. His 23 points and 14 rebounds helped the Wave earn a victory and improve to 3-1 overall and 3-0 in the GWOC.

“With having a new coaching staff in place there’s a learning process, but he’s doing a great job of trying to buy into what we do, and he’s playing with great effort every night,” Joseph, Greenville’s first-year coach, said. “He’s done everything I’ve asked of him.”

Along with being the county’s leading scorer, Gable also is among the top five in both rebounding and assists for Darke County boys. He averages 8.3 rebounds and 3.0 assists a game.

“I’ve challenged him to really be an impact player both offensively and defensively and really continue to challenge him to rebound as much as he can,” Joseph said.

Johnting scored her 1,000th career point in a game against Versailles on Monday. She led the Trojans with 12 points in that game.

“Stevie is a really good player and great person,” Arcanum girls basketball coach Matt Grote said. “At the beginning of the year her mother told me that Stevie didn’t want to know how close she was to 1,000; she just wanted to play.”

Johnting, who is committed to play college basketball at Cedarville University, is second among all Darke County girls with 17.0 points per game this season.

“She’s not a player that only tries to score either,” Grote said. “She works hard on defense, rebounds very well and has done a good job getting her teammates involved.”

So far this season the Arcanum senior is in the top 10 in the county with 5.3 rebounds per game. She’s an all-around player but really has made her mark throughout her high school career with her shooting abilities.

“I’m happy that she was able to reach the milestone,” Grote said of Johnting reaching 1,000 career points. “It’s a heck of an accomplishment.”