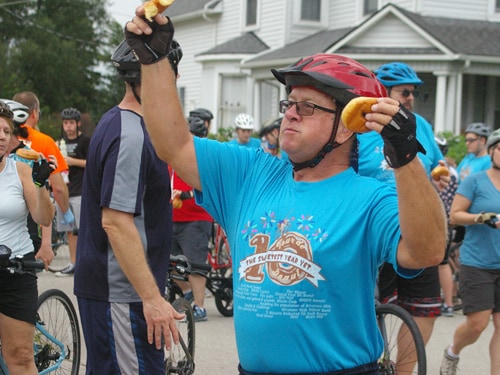 TROY – After a decade of pedal pumping and delicious doughnut consumption, the annual Tour de Donut cycling event will no longer be held in Darke County.

On Tuesday, city officials announced Troy as the new location for the 11th annual Tour de Donut cycling event. The event hosted 1,500 cyclists last year in the village of Arcanum, where the event was held for the last decade.

Event creator Roger Bowersock, a former professional cyclist, said he and his family frequent the Troy historic downtown district, which is how they came to move the event from Darke County to Miami County.

“Troy is the community that is going to allow our event to continue to grow and offer the things our participants want and desire for the riding public and their family members,” Bowersock said “We believe with the city of Troy’s help, the hotels that are being offered, additional outside activities, shopping for family members, we believe we can continue to grow this event. We are very excited to be in Troy next year and beyond.”

Bowersock said the event had simply outgrown its beginning in the village of Arcanum. At the end of last year’s event, Bowersock had mentioned he might move the event to another date to not clash with the Eldora Speedway’s annual World 100 Late Model race on the same September weekend in Darke County.

This year’s event will coincide with the annual Taste of Troy and WACO’s annual Fly-In.

“We expect a great crowd coming down to see the living room of our community in downtown Troy,” Mayor Michael Beamish said.

The Tour de Donut will start and end around the square of historic downtown Troy on Saturday, Sept. 16, 2017. Registration for the event will begin Jan. 1.

With the event moving to downtown Troy, the 2,000 number cap will be increased to 3,000 in order to accommodate the growing demand of interested cyclists who travel to this event from 30 states – including a rider from Alaska last year.

Last year, across all divisions, a total of 79 competitors joined the Dozen Club by eating 12 or more doughnuts. Each doughnut they ate deducted five minutes from their finishing time.

During this timed bicycle event, riders visit doughnuts stops along the course. For each doughnut the rider will eat (and keeps down), five minutes will be deducted from their ride time. The Glazer, a special doughnut stop, will return by popular demand. Each doughnut eaten at this stop is worth a 10-minute deduction in ride time.

According to the press release, a competition will be held between area doughnut shops to choose what the coveted special glazer doughnut will be.

Event organizers will offer three different distances for cyclists in 2017. The routes are currently being designed at this time.

The Donut Mini, a 15-mile course, will return with one doughnut stop. The Mini awards its own prizes and allows younger riders and families to take part in the fun due to the shorter distance.

The 30-mile course, the Tour de Donut, will offer two doughnut stops. And for the experienced cyclist, the Double D Challenge is a 64-mile ride with three doughnut stops. Prizes will be awarded for these courses in age group classes. Special awards will be given for the most doughnuts eaten, fastest time (without doughnuts), and the coveted golden Tour de Donut championship belt for the best adjusted “donut time.”

A free children’s event will take place at 8 a.m. on North Market Street. All children participating will receive a free T-shirt, finisher medal and unlimited doughnuts and milk courtesy of Orthopedic Associates of Southwest Ohio.

For more information on the Tour de Donut, visit www.thetourdedonut.com.