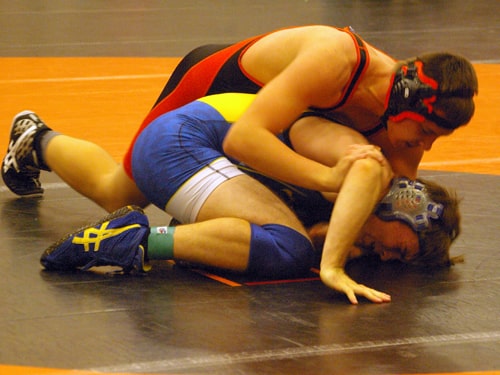 ARCANUM – The Arcanum wrestling team hosted a super dual with Lehman Catholic, Milton-Union and Tri-County North on Wednesday and recorded a victory against Lehman.

“We wrestled hard,” Arcanum wrestling coach Jared Beatty said. “We’re young so it’s always tough going out there against some seniors but good, hard wrestling. We looked pretty good for the most part.”

Arcanum started out facing a 6-0 deficit against Milton-Union as the Trojans forfeited the 113 pound match following a double forfeit in the 106 pound match.

Arcanum got its lone win against Milton-Union as Ethin Hoffman beat Jordan King 4-1 in the 120 pound match, cutting the Trojans’ deficit to 6-3.

Arcanum’s Matt Todd lost by 16-1 technical fall to Dylan Schenck in the 152 pound match to make the score 35-3 in favor of Milton-Union.

After Arcanum forfeited the 160 pound match to Owen Lewis, the Trojans’ Dylan Rhodehamel was pinned by Caleb Black with 1:43 left in the second period of the 170 pound match.

Following double forfeits in the 182 and 195 pound matches, Arcanum’s Nolan Yeomans was pinned by Tyler Courtright with 1:41 remaining in the first period of the 220 pound match. Then Arcanum’s Jayden Heltsley lost a 10-4 decision to Jeffery Strawser in the 285 pound match for the 56-3 final score.

Lehman cut its deficit to 12-6 when Alvaro Barerra pinned Gilem with 1:11 remaining in the first period of the 132 pound match.

Burns won the 138 pound match by forfeit and then Gabrig pinned Lehman’s Noah Young with 43.1 left in the third period of the 145 pound match, making it 24-6 in favor of Arcanum.

After a double forfeit in the 152 pound match, Todd lost a 13-4 major decision to Ethan Knapke in the 160 pound match. Brandon Simmons then pinned Arcanum’s Rhodehamel with 35.9 left in the second period of the 170 pound match, cutting the Trojan lead to 24-16.

Following double forfeits in both the 182 and 195 pound classes, Wyatt Long pinned Yeomans with 25.9 left in the first period of the 220 pound match to reduce Arcanum’s lead to 24-22.

“It helps out a lot,” Coach Beatty said of getting the victory against Lehman. “We wrestled Lehman earlier. We had some guys out so we ended up losing the dual so it’s always a good accomplishment to come back and win a dual like that especially after a tough Milton team.”