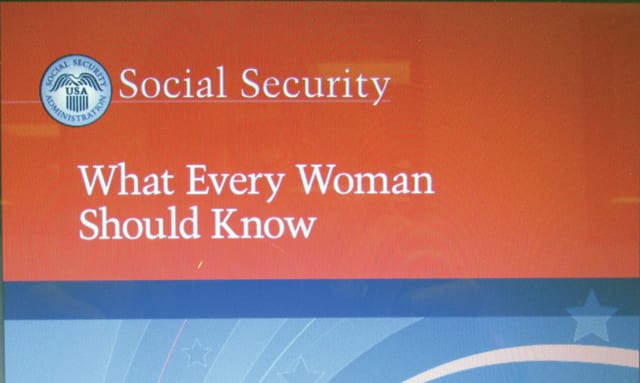 GREENVILLE – The Social Security Act was signed into law by President Franklin D. Roosevelt on August 14, 1935.

In addition to several provisions for general welfare, the new Act created a social insurance program designed to pay retired workers, aged 65 or older, a continuing income after retirement. Did Roosevelt consider how the differences in men and women’s income, and expected life roles could impact women’s Social Security (SS) benefits?

According to the Institute for Women’s Policy Research (IWPR), women are almost half of the workforce. They are the equal, if not the main breadwinner in four out of ten families. They receive more college and graduate degrees than men.

The U.S. Department of Education, National Center for Education Statistics shows in 2015, some 50 percent of females had completed an associate’s or higher degree, compared with 41 percent of males. Yet, on average, women continue to earn considerably less than men.

“In 2015, female full-time workers made only 80 cents for every dollar earned by men, a gender wage gap of 20 percent. Women, on average, earn less than men in virtually every single occupation for which there is sufficient earnings data for both men and women to calculate an earnings ratio. In middle-skill occupations, workers in jobs mainly done by women earn only 66 percent of workers in jobs mainly done by men,” iwpr.org said.

“Essentially, if they worked just as hard and harder they will not receive their due,” Diane Johnson said, in reference to SS and women.

Johnson, of Greenville, Ohio, is an Associate Professor, Emeritus of The Ohio State University, Department of Extension, Darke County. As Extension Educator in Family and Consumer Science, she has worked with community leaders and university sources to bring research – based educational programs to Darke County adults and youth.

“The average social security income of a woman at age 65 is around $12,500 and the average for a man is around $16,000 the same age,” Johnson said. “When you earn less you put less into the system. We live longer, so we have to stretch it out longer.”

Social Security Administration (SSA) data from 2013 shows 11,195 SS recipients in the county. Out of that number, 4,875 recipients are females aged 65 or more and 3,960 are male, the same age. According to Johnson, in regards to social security, women lose out because of their expected roles and lower income. They periodically leave the work force to take time out for child-rearing and taking care of parents.

“Most men don’t have to make those decisions, but women generally have to take off from the workplace to take care of children,” she explained. “That cuts down on the amount they contribute and lowers the amount they are likely to receive. We have very little control over this. I guess we can control how many children we have and how much time we take off from the workplace to some extent,” Johnson added.

Furthermore, upon retirement more women than men depend on SS benefits for most of their income. In 2014, 46 percent of all elderly unmarried females receiving SS benefits relied on Social Security for 90 percent or more of their income. Elderly women are less likely than elderly men to have significant family income from pensions other than social security, ssa.gov said.

Women generally receive lower pension benefits due to their relatively lower earnings and the higher share of women who work part-time, which is around twice the rate for men, according to ssa.gov.

“In other words, don’t depend entirely on social security,” Johnson said.

To read “Social Security: What Every Woman Should Know”, visit www.ssa.gov/pubs/EN-05-10127.pdfvisit.