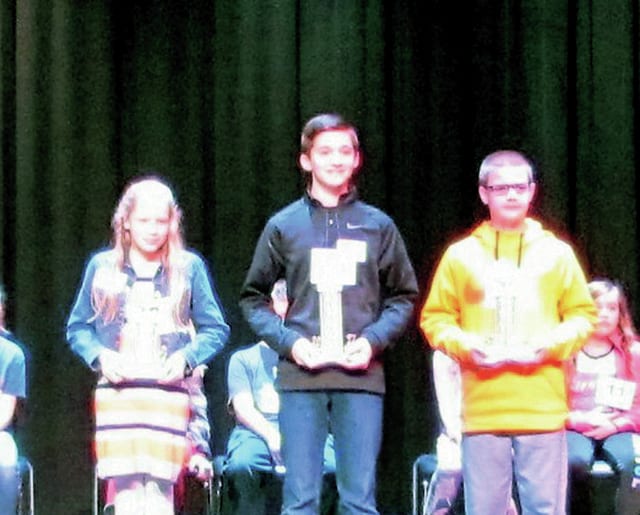 This was his second time competing in the competition.

“I’m very happy and proud of myself that I could make it this far and win,” Aiden said. “To prepare, I just tried to do a lot of reading.”

Aiden’s mother, Ashley, said for Arcanum-Butler Middle’s Spelling Bee, she and Aiden practiced a lot. But the county competition was another story.

“We did not know what the words were going to be for this one,” she said. “He has a pretty good vocabulary so I think that helps.”

The event took place at the Performing Arts Center at Versailles Exempted Village Schools. It began with the Spelling Bowl. This allowed school district competition winners and runners-up to compete. They each had a chance to spell 12 words in their round, to allow the students to accumulate points. The school district with the most points at the end of four rounds was the winner. Arcanum – Butler Local School District won with 17 correct spellings.

According to Arcanum-Butler Superintendent John N. Stephens, this makes two years in a row that Arcanum – Butler has won the Spelling Bowl.

“This was a great addition to the Spelling Bee, because it allows more students the opportunity to participate,” he said.

“It’s been fun the last of couple years in the spelling bees at the schools, because we have three or four really good spellers,” he said. “Last year, we had to add on another day of the spelling competition because the competitors exhausted our whole word list. It’s fun to get everyone in the county together to have an opportunity to do this. I’m very proud of our students; they did a really good job.”

“We are very proud of the success our students had today,” Stephens said. “Aiden has really worked hard to be a top speller. Aiden and Charlie have pushed each other the past few years and have provided enteraining district spelling bees. I would like to congratulate our Spelling Bowl team of Aiden, Charlie, Brooks and Elizabeth on an outstanding job, and to Aiden for winning the Spelling Bee. All of the students throughout the county did a great job! I would like to thank April Hoying and the Darke County Educational Service Center (ESC) for their continued support of the spelling bee!”

The Moderator for the spelling bee April Hoying is also Versailles Exempted Village Schools Director of Curriculum at the Darke County Educational Service Center (ESC). She explained that each of the seven participating districts have their own spelling bees. Each of those sent their champion and runner’s up to the Darke County Spelling Bee.

“It takes several hours of preparation, printing materials, getting out letters to parents, getting pronouncers, judges and things like that,” she said. “I think it’s a great opportunity for the students, so we enjoy taking the time to prepare.”

As for preparation, the students are unaware of the words on the list, provided by Scripps National Spelling Bee, Hoying said. Most of the district spelling bee coordinators have done this for several years and have old lists they use with the students to prepare, she added. There is also a website for students and parents to use for practice.

Some of the words the students were asked to spell include: admiral, hors d’oeuvres, prairie, newfangled, guru, pretzel, safari, stoic, aria, knapsack, trek, borax and nestle.

“The students are nervous, but also excited to come and represent their districts,” Hoying said. “As you can see, there are a lot of parents, grandparents, principals and building coordinators here.”