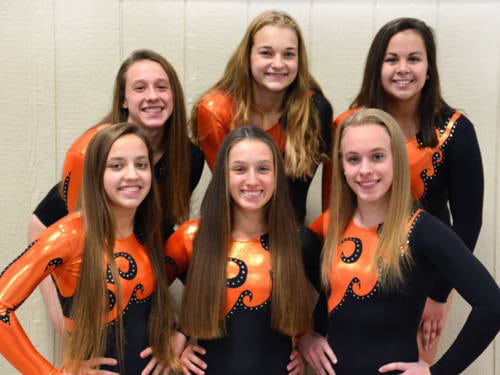 VERSAILLES – This is only the first year Versailles has had enough high school gymnasts for a full team, but the Tigers already have qualified for state.

“I think it’s phenomenal,” said Coach Jessica Pothast, who leads the team along with Coach Katy Boston. “I think there’s a lot of good talent here, and it’s exciting they’re able to display that for their school.”

Versailles has had high school gymnasts for four years now, but this is the first time the Tigers, or any Darke County school, had enough girls to compete in the team competitions. They’ve excelled in their inaugural season as a full squad, winning every meet they’ve competed in.

Last week Versailles won the Southwest District championship to advance to the state meet for the first time in program history.

“I think it’s great that we made it to state and taking it as far as we can go,” Kingrey said.

“We looked at some of the bigger schools,” Jorja Pothast said, “pretty hard to reach them but we’re not too far off.”

While this is the first year Versailles has a high school team, most of the girls have competed in gymnastics for many years with the exception being Barlage, who joined the sport this season. Some of the girls practice 16 hours a week throughout the year, they said, while others practice eight hours a week during the season.

“We’ve been in this sport for a long time,” Kingrey said.

Jadyn Barga was the all-around champion in the Southwest District meet. She also finished second on the balance beam, third on uneven bars, third on vault and fifth on floor excise to qualify for state individually in each discipline.

Ahrens finished fifth in the all-around. She’ll compete individually in that event along with vault and floor, finishing as the district runner up in both. She’s also the first alternate in bars.

Kingrey will compete individually on bars and also is the first alternate for beam and all-around, having just missed state qualification on beam on a tiebreaker.

Ellie Barga competed for Versailles in each event at the district tournament. Jorja Pothast, who is battling an ankle injury, competed in the bars and beam while Barlage competed on vault and floor.

By qualifying for state the gymnasts are adding to the rich history of athletic success at Versailles. The school has won state championships in baseball, basketball, cross country, football, track and field and volleyball and has had state qualifiers in many other sports as well.

Jorja Pothast was part of that success this past fall as a member of the school’s state-qualifying girls golf team.

“It’s kind of like the same thing because I have a great team,” she said. “And I’m really excited, like the same as golf. I just can’t believe it happened all in one year.”

“We’ve continued to add on to the two,” Coach Pothast said of the success since Keller and Shook got Darke County gymnastics going six years ago. “It’s just exciting to see it grow.”