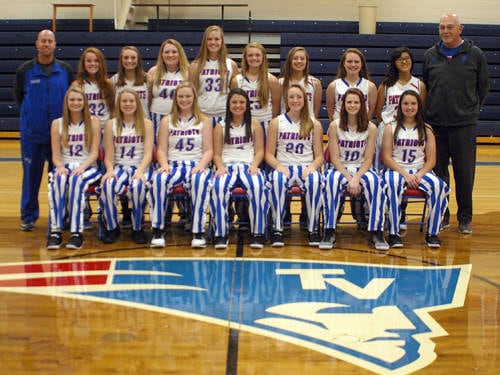 NEW MADISON – After a three-year hiatus the Tri-Village girls basketball team is happy to be back in the regional tournament but not yet satisfied.

Tri-Village was a fixture in the regionals of the Ohio High School Athletic Association tournament from 2009 through 2013, making the sweet 16 in five consecutive years. But the past three seasons the Patriots fell short of that plateau, making them appreciate their accomplishment even more.

“It is really hard to make it this far,” senior Allie Downing said. “We didn’t realize it until we couldn’t make it out of the sectional my freshman and sophomore year and then last year we struggled in districts.”

In 2014 and 2015 Tri-Village was eliminated in the sectional finals of the OHSAA tournament. Last year the Patriots made it to the district final, one win from returning to the regional, but again came up a little short.

“I think sometimes our people around here just think success is a given and don’t understand how hard it is,” Tri-Village coach Brad Gray said. “Certainly being through it and understanding how tough it is to make a tournament run, it makes you appreciate it, especially when you’ve been there before and then you’ve been away for the last couple years.”

The team that knocked Tri-Village out of the tournament last year was Jackson Center, and now the Patriots get a rematch with the Tigers in this year’s regional semifinals.

“I think it’s a great opportunity for us to come back and prove that last year was a mistake,” senior Rachel Miller said.

Tri-Village likes its chances against Jackson Center but realizes a win is far from guaranteed. Jackson Center is the defending regional champion, qualifying for last year’s state final four, and also is a two-time defending state champion in volleyball.

“They’re champions,” Coach Gray said. “They’re back-to-back state volleyball champions. They went to Columbus last year in basketball. They definitely play with a moxie about them. They believe every time they step out on the floor probably regardless of what sport it is that they’re going to come out victorious.”

Along with its winning tradition, Jackson Center presents some matchup problems on the court. The Tigers have multiple girls who stand over 6 feet tall and guards who can hit long-range shots.

The Patriots know they’ll have to come prepared defensively to match up with all of the Tigers’ offensive weapons. They also need to rebound well and prevent the Tigers from getting second-chance opportunities.

“They play a really physical game so we’re going to have to match their physicality,” senior Danika Mann said.

However, Tri-Village isn’t worrying about any potential future matchups and giving Jackson Center its complete attention.

“We’re taking it one game at a time,” Mann said. “We never look ahead. We obviously want to make a run, but it’s one game anybody can win.”

“We want payback for last year,” Downing said. “We want to make sure that we come out on top this year.”

Tri-Village and Jackson Center will play at 6:15 p.m. Thursday at Butler High School in Vandalia.