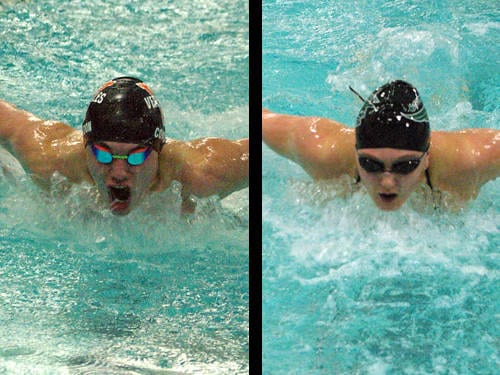 DARKE COUNTY – A pair of sophomore who excelled in multiple events this season are The Daily Advocate’s swimmers of the year.

“She had a great season,” Greenville swim coach Mollie Mendoza said. “She had improved from last year’s performance at state. Last year I think she went into state competition not sure what was going to happen. It was all new to her. This year she kind of knew what was expected, and I think that helped alleviate some of her nerves.”

Gable had a successful performance at state even though she was battling bronchitis and an ear infection at the time.

“She’s definitely a hard worker, and she proved that in the pool,” Mendoza said.

“She has been such an asset to the team because of her versatility,” Mendoza said. “She’s able to jump into any event and be able to perform well no matter what it is.”

“This year she has really buckled down,” the Greenville coach said. “She has made it a goal to improve all her swimming times. She’s been more focused this year than ever before.”

Being just a sophomore, Gable still has opportunities ahead of her to become even better.

“I know that whatever she decides to swim next year and the year after she’ll do quite well,” Mendoza said.

“He can swim anything,” Versailles swim coach Penny Cromwell said

This year the Versailles sophomore qualified for four events at the OHSAA district meet including two relays and two individual events. His best finish at districts was a seventh place finish in the 50 yard freestyle.

“He’s determined,” Cromwell said. “He’s got that determined attitude. He goes out and works hard every day at practice.”

At the Coldwater Invitational, the unofficial Midwest Athletic Conference swim meet, Condon broke the meet record in the 50 yard freestyle with a time of 22.75 in the first leg of the 200 yard freestyle relay.

Throughout the season Condon surprised his coaches with his continuous improvement.

Even though he was just a sophomore, Condon already is a leader for Versailles’ swim team.

“He always motivated the other kids,” Cromwell said. “The team members looked up to him.”

With two more years of high school swimming ahead of him, Cromwell expects to see big things out of Condon.