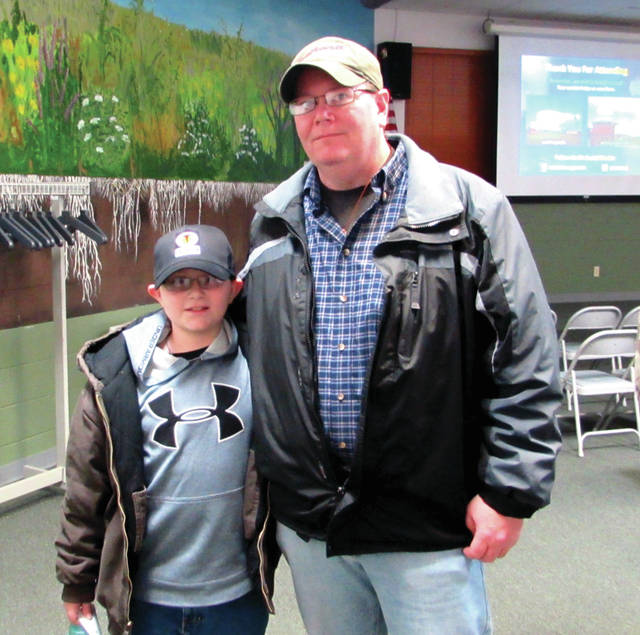 “I wanted to come because I love storm spotting with my dad (James),” he said. “I am also with the Cub Scouts and I will earn my Cub Scout badge by taking this class.”

James said he has been storm spotting since 1994, and if Tyler was going to accompany him, he needed training. Tyler said the class raised his interest about weather and he plans on sharing his new found knowledge with others. That was the entire purpose of the class taking place during Ohio’s Spring Severe Weather Awareness Week (March 19-25). It was to raise awareness and educate people about the warning signs of severe weather and encourage them to report their findings. The training was hosted by the Darke County Emergency Management Agency (EMA) conducted through the National Weather Service (NWS) out of Wilmington, Ohio.

During the class, students were taught what to look for and what to report to the NWS. They learned the role of the SKYWARN Spotter, to identify examples of proper safety while spotting during specific spotting scenarios, to identify reportable events and criteria for reporting, to list the seven required pieces of information to communicate when making a spotter report, to demonstrate how to make clear and succinct spotter reports and to identify from a photo or video important visual features to report.

It covered thunderstorm formation, severe weather production and features associated with severe storms. Trained Storm Spotters make real-time observations of tornadoes, hail, wind and significant cloud formations. By reporting their observations, they are assisting the meteorologists at Wilmington in their warning decisions, and enabling the NWS to fulfill its mission of protecting life and property. According to Darke County EMA Director Mindy Saylor, EMA tries to host the class annually in each county, or sometimes counties hold the class jointly. Saylor said the class had a pretty good show of 33 attendees.

“They need more eyes on the street,” Saylor said. “The spotters really provide a vital role in getting that information out for the warnings and watches. On August 20, (2016) we had a tornado just outside of Gettysburg and the spotters were significant in getting that warning issued with a lot of video and photos of it coming through. The weather service was very pleased with that.”

A couple of things to ask when observing weather are: is debris coming from more than one direction and is there an upward rotation? Reports are submitted by reporting the time, event and location (TEL). The NWS encourages all spotters to attend training at least once every two years. An advanced class is usually offered once a year in either Cincinnati, Dayton or Columbus.