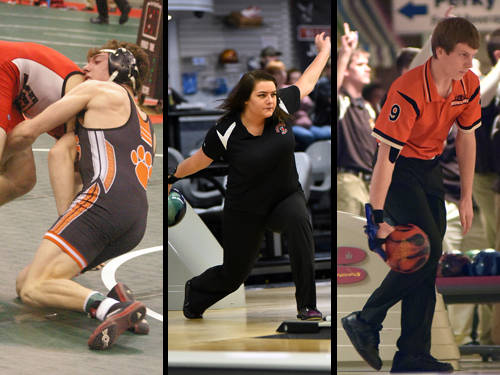 DARKE COUNTY – Three seniors who finished their high school careers with appearances in their respective state tournaments are The Daily Advocate’s bowlers and wrestler of the year.

Groff led all Darke County bowlers with an average score of 202.6 per game this season. He knocked down almost nine pins per game more than anyone else in the county.

“I think that’s pretty amazing that you can average a 200 or better as a high school player,” Versailles bowling coach Tyler Phlipot said.

In his four years of high school, Groff helped lead Versailles to the Ohio High School Athletic Association state tournament four times. He helped lead the Tigers to the state semifinals as both a freshman and sophomore and helped guide them to the state quarterfinals this season.

During his sophomore season Groff was named first team all-Ohio when he finished fourth individually at the Division II state tournament.

“You have to be consistent with your first shot,” Phlipot said of Groff’s abilities to put up high scores. “He’s got a good spare game, which helped him out with that.”

Groff worked so hard to perfect his game, Phlipot said. He spent extra time after practice working to become better and always was open to coaching.

“His work ethic, his attitude. He’s a real hard worker. He’d stay after practice and work on his game. When he’d get in a little slump he didn’t get down on himself,” Phlipot said. “He’s a good listener so if you tell him something he’ll do it.”

Along with being a great bowler, Groff also was a great leader for the Tigers and set a great example for his teammates.

“He meant a lot to the program,” Phlipot said. “A lot of the kids looked up to him.”

“With her sister Quincy Warren starting MV’s state run in 2014, I felt like she was motivated to carry on that tradition,” Mississinawa Valley girls bowling coach Mike Warren said, “hopefully encouraging her teammates to work hard to continue.”

Spencer Warren was second among Darke County girls this season with an average score of 175.6 per game.

“We both feel she had a very successful season,” Coach Warren said.

For her career Spencer Warren was a four-time district tournament qualifier. She was named first team all-West Ohio High School Bowling Conference in each of the past two seasons after being a second team selection in 2015 and an honorable mention selection in 2014.

“Tanner had a solid year, and it was great to see him make it back to state,” Versailles wrestling coach A.J. Bey said.

“He works very hard in the wrestling room and in the weight room, which pays off on the mat,” Coach Bey said.

In the OHSAA postseason he finished second in both the sectional and district tournaments.

“He has had a great wrestling career, and I am glad to see him have a successful senior year as well,” Coach Bey said. “I know he had a goal of placing at state, coming up one match short, but he has nothing to be ashamed of. He has wrestled hard all year, and I am very proud of him.”