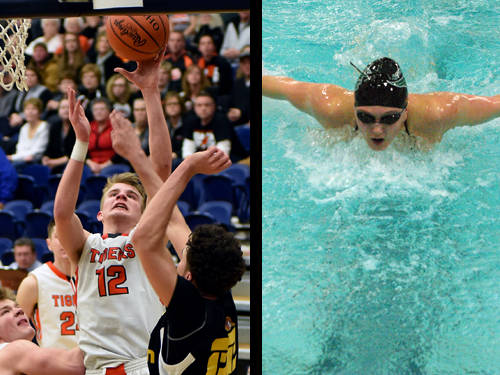 DARKE COUNTY – Two athletes who have proven they’re among the best in the entire state are The Daily Advocate’s winter sports athletes of the year.

Ahrens is just a junior, but he’s already verbally committed to play college basketball at The Ohio State University. He gets a lot of attention from opposing teams, players and fans, Versailles boys basketball coach Travis Swank said, but he’s handled the attention very well.

“Everybody knew coming into the season that he could score and everything, but I think he showed his complete game this season,” Swank said.

This year Ahrens scored his 1,000th career point. He averaged 22.4 points, 8.9 rebounds and 3.5 assists per game as a junior for Versailles, which won the Midwest Athletic Conference championship.

“We were pleased with what we did, what we accomplished,” Swank said. “We got a MAC title, sectional title, district title.”

“He became a complete player this year,” Swank said. “He bought in, and we reaped the rewards as a team all together.”

The Versailles junior has a ton of God-given ability, but he’s also a hard worker, Swank said.

“He’s constantly working at it,” the Versailles coach said. “He never takes any time off it seems like. He’s not satisfied with where he’s at right now. He wants to get better.”

“She had a great season,” Greenville swim coach Mollie Mendoza said. “She had improved from last year’s performance at state. Last year I think she went into state competition not sure what was going to happen. It was all new to her. This year she kind of knew what was expected, and I think that helped alleviate some of her nerves.”

Gable had a successful performance at state even though she was battling bronchitis and an ear infection at the time.

“She’s definitely a hard worker, and she proved that in the pool,” Mendoza said.

“She has been such an asset to the team because of her versatility,” Mendoza said. “She’s able to jump into any event and be able to perform well no matter what it is.”

“This year she has really buckled down,” the Greenville coach said. “She has made it a goal to improve all her swimming times. She’s been more focused this year than ever before.”

Being just a sophomore, Gable still has opportunities ahead of her to become even better.

“I know that whatever she decides to swim next year and the year after she’ll do quite well,” Mendoza said.