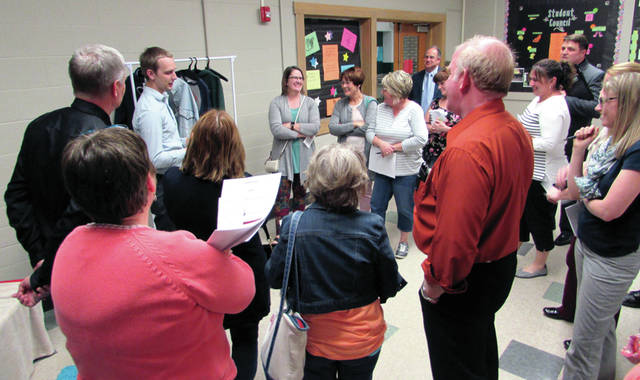 GREENVILLE – The Coalition for a Healthy Darke County (Coalition) has organized a program in conjunction with Greenville High School (GHS) Principal Jeff Cassell to provide scientific data, evidence-based information and youth-led prevention dialogue about the growing addiction and substance abuse problem in the county.

On Wednesday, approximately 850 9th-12th grade students at GHS were recipients of that program through an assembly at GHS. Later that evening, the program was presented to the parents. Darke County Chamber of Commerce and Coalition President Sharon Deschambeau said all of the school districts have been offered the program and the schools have to invite the Coalition to present.

“I really want to thank Superintendent Fries and Mr. Cassell for caring about their students, and also for bringing what we consider Gold Standard community prevention to your students and to the audience tonight,” said Deschambeau.

“Don’t think it is just adults we are talking about up here,” Chief Deputy Whittaker said. “It’s not – I’ve been surprised. I thought I had my thumb on some things. I couldn’t believe this 17-year-old girl was using heroin. A friend once told me, it is not your job to trust your kids. Talk to your kids about this. Ask them what they know about drugs.”

According to Whittaker, last year, first responders received 93 overdose calls (not all deaths) in the county. So far this year, there have been at least 80. Dr. Reiss said they are seeing more and more patients who do not know what they are getting in their drugs. Dealers want more addicts, so they are adding substances, she said. Marijuana is not likely marijuana.

“Marijuana is now being treated and mixed with heroin and fentanyl,” she said. “Talk to your family about this. Three out of four people who abused heroin, abused prescription narcotics first. More than half of the people who abuse prescriptions don’t pay for them. They are coming out of our medicine cabinets. Only 15 percent are paid for from a dealer. This is part of the problem – getting rid of those drugs. Lock up your medicine cabinets.”

Prevention and Wellness Coordinator Ian Ridgeway brought the traveling exhibit “Hidden in Plain Sight” for parents to become more in-the-know regarding warning signs of risky behavior from their children. The exhibit, a child’s room, is open for adults/parents go through and identify possible clues that indicate substance abuse activities. About 57 items held clues to suspicious behavior.

Greenville Learning Center Director Careers with Children Teacher Amy Schoen attended the event with the parents and also brought her students to the morning event. Later, she had asked her students to speak or write in their journals about their feelings of the presentation.

“Some of my students are uncomfortable sharing their personal stories,” Schoen said, but they wrote and wrote about it. Some of them were writing on the front and back, just filling up their pages with their thoughts and feelings. Some of them are living with this every day in different ways, either in their homes or around them. A lot of them didn’t know about it (heroin, fentanyl or other drugs) being in the marijuana. They were saying they had no idea. They felt it was very impactful for them to sit in that assembly and hear some of those things today. I thank the panel for coming. After hearing the juniors and seniors, it was an opportunity for our kids to hear from the professionals to know what is really going on.”