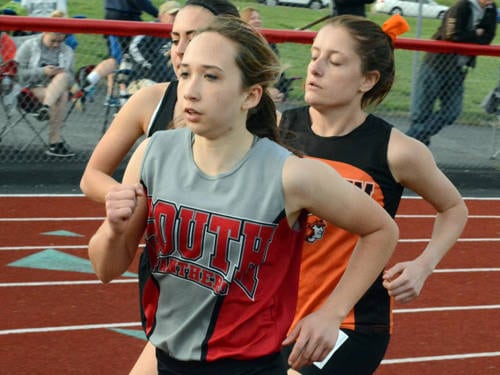 WEST ALEXANDRIA – Twin Valley South’s Fred Durkle Invitational attracted larger teams from the Southwestern Buckeye League and Southwest Ohio Conference so it allowed teams in the Cross County Conference that attended to compete against bigger schools and see how they measure up.

Some local athletes did set individual records, and the best local team finish was by the Franklin Monroe girls, who finished third. Arcanum’s girls finished sixth, Ansonia seventh and Tri-Village was 14th.

The best finisher for the Darke County boys was Arcanum, who finished fifth. Next next was Tri-Village at eighth, Franklin Monroe 10th and Ansonia 11th.

Host Twin Valley South won both the girls and the boys trophies.

Due to some equipment problems, the meet ran late. It was past 11 p.m. by the time the meet was over so that made for a late night for all athletes involved. On the other hand, the weather held up for springtime in Southwest Ohio and the temperatures were moderate. So balancing the good with the bad, it was a good night overall.

Individually, Nicole Berry from Franklin Monroe and Marcy Bradshaw from Arcanum had stellar nights. Berry broke two records with a shot put of 45 feet 5 inches, which broke the meet record and also the Franklin Monroe school record. Bradshaw won the 3,200 meter run with a time of 11:57.48 – setting a school record for Arcanum.

Other local top finishers were Lydia Sink of Ansonia won the high jump at 5 feet. Selene Weaver of Franklin Monroe won the pole vault at 10 feet.

For the boys Arcanum’s 4×800 meter relay team of Isaac Stephens, Justin Vanatta, Tanner Delk and Chance Klipstine won with a time of 8:23.30. Brock Shellhaas of Ansonia won the pole vault at 14 feet 6 inches.

Franklin Monroe had a decent night, so Coach Rick Ingold was happy with the Jets’ performance.

“Both boys and girls teams exceeded expectations this evening,” Ingold said. “We really performed well. We had some athletes that we expected to be in top 10 – but they went past that and scored some points for us. Our throwing girls did really well today. Nicole Berry won the shot and Hannah Eley was fourth. Berry was second in discus and Tara Goubeaux was third. So we dominated in the throwing events. Weaver won the pole vault for us, and she is just a freshman. She also scored in the long jump and the 400 meter dash, so we are excited about her.”

The Franklin Monroe boys are improving.

“Bryce Robison scored for us in the open 200 meters – he did well for us,” Ingold said. “Up to this point in the season, this is the best competition that we have seen. We won’t see this level of competition until the end of the year. We have had a few little injuries but no big ones as of yet. We are actually getting kids back that started the season with some injuries, so we should get stronger.”