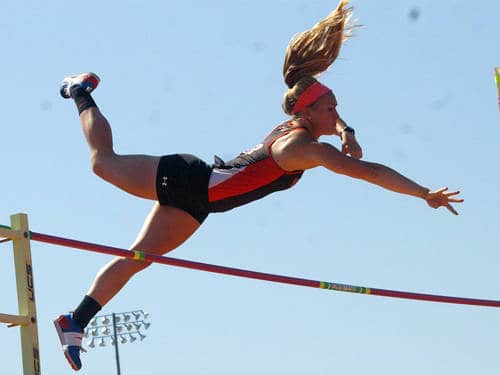 “It’s amazing,” Frantz, a senior, said. “Last year after not being able to compete at the state meet due to a concussion was really devastating. This year was my year of redemption, and it definitely went really well. I did exactly what I came here to do. I was calm, cool and collected and was able to pop out a new PR. It was awesome.”

“I had a really good start, which I think helped me throughout the race, but I think we all had great starts so I was up there with them,” the Versailles junior said. “Then I think we all hit hurdles, too, it’s just that I hit less hurdles enough to pull out a lead.”

Steinbrunner finished 10th at state in the 110 meter hurdles both his freshman and sophomore years. This year he was hoping to make the podium but never imagined he’d win the state championship.

“I’m just excited,” he said. “I didn’t even think I was going to go from two 10th places to a first place. It’s just unbelievable.”

Joe Spitzer finished third in the boys 3,200 meter run, finishing his junior season on the podium.

“It was a really hard race,” he said. “The heat and everything … times weren’t quite what they were in some of the other races. I did good. I ran my third-best time of the year. Got third place. I didn’t even make it to state last year. That’s way better than I thought I would do.”

Earning a spot on the podium in his first appearance at the state track and field meet has Spitzer excited about what lies ahead next year.

“It felt great,” he said. “Really excited for next year coming back hopefully going for the title.”

Along with her championship performance in the pole vault, Frantz also finished third in the girls long jump. She set a personal-best mark of 18 feet 5.5 inches at the state meet to earn a spot on the podium.

“That was pretty awesome,” the future University of Akron track and field athlete said. “I never expected to be an 18-foot jumper, but I really owe it all to my dad. He’s been telling me, all year he’s been saying ‘Jenna, you’re going to be an 18-foot jumper this season,’ and I managed to pull it off. It was amazing. That’s something that I never thought I’d be able to do.”

Frantz also was part of Versailles’ girls 4×100 meter relay team along with Lucy Prakel, Cassie Peters and Ava Moran. The Lady Tigers finished sixth in the state with a time of 49.74 seconds.

“It was a really fast race, but I think we did our best, and we left it all out there,” Cassie Peters said. “We definitely improved from last year so that was great. I was really happy with how we did.”

“I’m really excited,” the Versailles sophomore said. “That was kind of my main goal was to walk out with a medal. Being in this event I knew it was going to be hard because everything was so close and you know anything could happen and we’re competing against the best in the state.”

Prakel also competed individually in the girls pole vault. She earned a spot on the podium with Frantz, finishing in sixth place by clearing a personal-best height of 11 feet 2 inches.

“It’s amazing because I think of all the hard work I’ve gone through this season and I’ve improved so much, and it’s great to just think what I can do throughout next year with what I’ve done this year,” the Versailles freshman said. “And I hope I improve at the rate that I am now, and if I do that I should be going some new places.”

Entering the state meet Prakel dreamed of making the podium, but she didn’t think it actually would happen.

“My goal was to get on the podium, but that was kind of like an unrealistic goal,” she said. “Like it was kind of in my dreams and I was thinking about it, I was kind of visualizing in my head what would I do if it happened. But let alone getting sixth, that’s fantastic. It’s a great feeling.”

Senior Camille Watren helped 4×4 relay team qualify for the finals on Friday but was unable to run on Saturday. She was replaced by Cassie Peters in the event finals.

Camille Watren, who has battled through hamstring injuries the past two years, also had qualified for state in the girls 400 meter dash. However, she didn’t compete in Columbus in that individual event so she’d be as fresh as possible to help her teammates in the 4×400 meter relay.

For Camille Watren, Langenkamp and Frantz, the state competition marked the end of their high school careers for the Versailles Tigers.

“This was a great way to end my career,” Frantz said. “It was an amazing four years being a Versailles Tiger for their high school track team. I ended it with a smile on my face in all my events. I couldn’t have asked for a better way to transition into college track.”