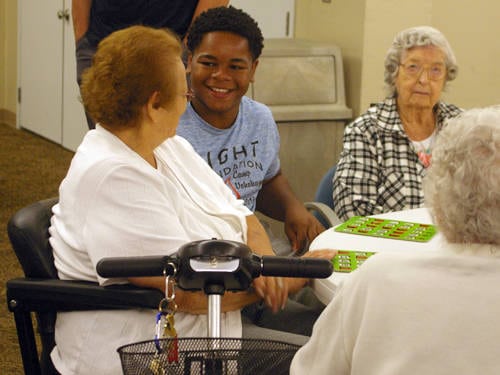 GREENVILLE – Four young men from New Orleans are graduating from the Light Foundation’s Camp Vohokase as the foundation wraps up its annual outdoor leadership camp Thursday in Greenville.

Camp Vohokase is an annual program by the Light Foundation – a non-profit organization founded in 2001 by Greenville native and three-time Super Bowl champion Matt Light. The camp is held each year at the foundation’s 400-plus acre facility near Greenville, Chenoweth Trails.

“The kids this year have been amazing,” Light Foundation Program Director Nick Schuckman said. “Sometimes in years past when we do our fireside chat not a lot of the kids will open up or it’s really hard for us to draw them, to engage them in the conversation a little bit. But this year we’ve asked these kids a number of questions and they just open up with everything.”

The camp aims to instill leadership, accountability, hard work and ethics into 16 boys from at-risk areas across the United States in the hope that they’ll become leaders in their communities. The camp in Darke County is one part of a four-year program that works with the boys throughout their high school careers.

By bringing the boys together for the camp, Light Foundation leaders also hope they learn from each other.

“It’s been pretty great,” Pope said. “We’ve all just been positive, and the things we haven’t been positive about everyone has just picked themselves back up, and we’ve been able to accomplish anything we’ve set our minds to and anything we’ve wanted to do throughout the camp. Every obstacle there is we’ve overcame it.”

Coming from a wide array of backgrounds, the campers are exposed to people with different worldviews. But they still find they face many of the same struggles, which helps them connect to each other.

“When I first came here I had a lot of anxiety, social anxiety, and I wasn’t really outgoing,” William Terrance Moses Slate from New Orleans said. “But now I’m really connecting with all the campers, becoming a good leader and everyone admires what I do.”

Slate, who hopes to own a restaurant someday, brought some of his passion and experience to Darke County by cooking a New Orleans-style meal for the campers and counselors that included gumbo, red beans and rice, jambalaya and corn bread.

The campers also were exposed to many outdoor activities that many of them don’t experience at home including fishing, archery, paintball, dirt bike racing and ropes courses.

“A lot of things we do here we can’t do where I’m from,” Ethan Medeiros from New Bedford, Massachusetts, said. “It’s nice to be able to go help build the timber frame or go set up the blue jay houses and all that other cool stuff.”

The campers worked on a number of projects throughout the 10-day camp including constructing a timber frame structure, building bird houses, creating obstacles for the Gauntlet Trail Run and building a trebuchet – a weapon that is similar to a catapult.

“I don’t know many people who have a trebuchet laying around, much less one that’s 15 feet tall, 1,500 pounds,” Schuckman said. “So not only will we have fun doing that but they learn the science behind it.”

A favorite activity of many campers continues to be a visit to Brethren Retirement Community.

“I just really like going to that place because I like hearing their stories, helping out their bingo,” Slate said. “It’s easily my favorite part.”

At Brethren the campers lead games of bingo and also go fishing with the residents.

“I like putting smiles on the elders’ faces and playing bingo with them,” Pope said, “I think it’s pretty fun.”