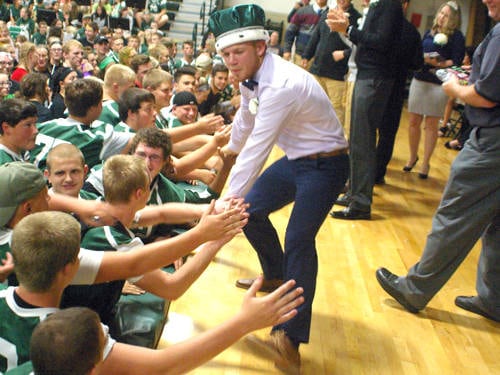 “It was up for grabs for anybody. I think it was a pretty equal running competition. I was going to be happy with whoever won, and luckily it was me.”

Trick, who was crowned Chief Greenwave by 2016 Chief Greenwave Justin McMiller, participates in track and field. He was an all-Ohio pole vaulter this past spring when he cleared 14 feet 4 inches and finished sixth overall in Division I at the Ohio High School Athletic Association state meet.

The Greenville senior also is a member of the Science Club, Art Club, Fellowship of Christian Athletes, CORE Leaders and Engineering Club. He is in the National Technical Honor Society and has received the Maid-Rite Sportsmanship award. Upon graduation from Greenville he’ll continue his education at a four-year university and pole vault in college.

Prior to Trick being crowned, Thursday’s Homecoming festivities began with a parade that went throughout the streets of Greenville. The grand marshal was Gaylen Blosser, who has been a prominent business owner and journalist in the community.

The parade included groups representing Greenville City Schools, Green Wave athletics teams and clubs, and other community organizations. The Greenville Alumni Association was represented by the Class of 1967.

This year’s Homecoming Theme is: “A Homecoming Through the Decades.” The week-long festivities have included decades dress days in which the seniors dressed with a 1970s theme, the juniors represented the 1950s, the sophomores recalled the 1980s, the freshmen represented the 1990s, and the staff dressed in a 1960s theme.

Following the parade, the festivities moved to the Greenville High School gymnasium where the Green Wave held a prep rally and Chief Greenwave coronation.

“If you were with us last week at Urbana just wait,” Shaffer said, “tomorrow is going to be even better.”

Prior to Friday’s game the Homecoming queen will be crowned with Bailey Bach, Bailey Bennett, Hope Byrum, Grace Coakley, Sierra Cress, Natalie House and Taira Ruble vying for the crown.