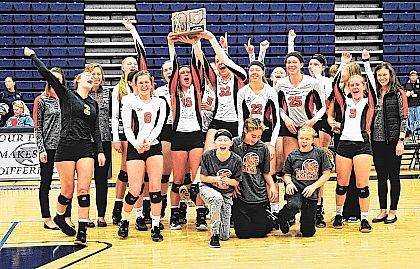 VERSAILLES – To earn a spot in the state championship match, the Versailles volleyball team will have to do something no one has done this year – defeat Tuscarawas Valley.

Not only has Tuscarawas Valley won all 28 of its matches this season, the Trojans haven’t even lost a set this season.

“We can’t really worry about that right now,” senior Kate Stammen said. “We have to worry about ourselves. We are all aware of that, but it’s not really one of our concerns at this point.”

Along with its unblemished record, Tuscarawas Valley also boasts one of the most talented and experienced rosters in the state tournament.

The Trojans had four players earn all-state honors from the OHSVCA including a pair of first teamers, Alexis Gilland and Kierrah Stewart. Tuscarawas Valley was the lone Division III school to have two girls make first team all-Ohio this year.

Stewart is one of three Trojans who will play in the state final four for a third consecutive season along with Jenna Franks and Jadyn Kuykendall. Sage Peters also played on last year’s state final four team.

“I guess it can be a mind game a little bit seeing that they’ve been so competitive all season, but I also know that our conference has prepared us for whatever team we can face,” senior Ellen Peters said. “We’ve played some of the greatest players in the state of Ohio in D-III and D-IV, and I think that has prepared us for what we’re about to face.”

“We have three MAC teams going to state this year so that just shows how tough the competition is,” senior Cassie Peters said, “and I think that really helped prepare us, all the tough games we’ve gone through and even the scrimmages and practices.”

Along with a number of tough matches this season, the Tigers also gain confidence from other big moments they’ve been in throughout their high school careers.

Seniors Kami McEldowney and Danielle Winner both played on Versailles’ 2014 state final four volleyball team. Along with the volleyball experience, the roster is full of girls who’ve competed in state tournament events in basketball and track and field.

“The seniors in general, they’re just such a successful class,” said Versailles volleyball coach Kenzie Bruggeman, who was an assistant coach for Versailles’ 2014 state final four team. “And I think that their leadership showed on Saturday (in the regional final against Miami East) to where it was a very intense game, but Kami, Danielle and Ellen just took all of the underclassmen under their wing and calmed their nerves.”

Having competed in so many big events already in their high school careers, the Tigers are confident they won’t be rattled by the atmosphere at this weekend at Wright State University’s Nutter Center.

Versailles has done it before, and the Tigers won’t switch up their game plan now. Just as they have done all season, their focus is on their side of the net regardless of who is on the other side.

“It’s what we’ve been focusing on the whole tournament run – our side and what we need to execute,” Bruggeman said. “We know that they’re a very good team, which is to be expected when you’re in the final four. So it’s a matter of controlling what we can control and coming out with a similar game plan.”

Bruggeman is counting on her senior leaders to step up again when the Tigers take the court for their semifinal match against Tuscarawas Valley at 2 p.m. Friday at the Nutter Center.

“It feels amazing to be able to go there,” senior Mallory Marshal said of making the state tournament. “There’s only so many teams that get to go, and to be one of those is just great.”

The winner of the Versailles-Tuscarawas Valley will play either Coldwater or Independence, who play in the other state semifinal at noon Friday, for the Division III state championship at 3 p.m. Saturday.

“We worked our butts off all season for this,” Ellen Peters said. “I think it’s something we’ve all worked for and wanted our entire career.

“I think that’s the best way to go out. To try to get up another banner in the gym and see what we can do to end our senior season.” 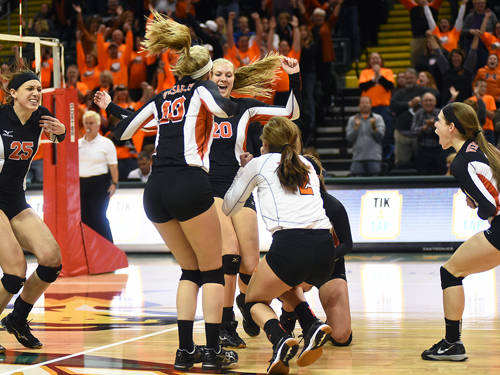