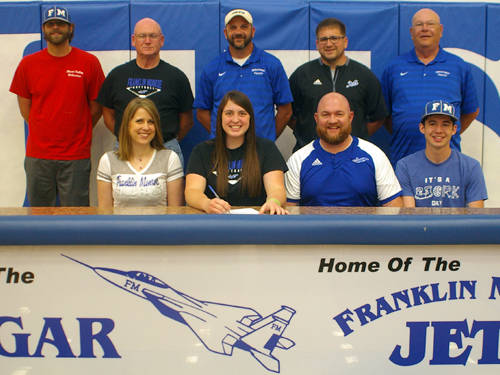 PITSBURG – What once seemed like an unattainable dream became a reality on Friday afternoon as Franklin Monroe’s Kinsey Goins committed to the Berea College softball team.

Goins, the daughter of Monte and Amy Goins, said she’s excited to play college softball because she loves the sport even though not long ago she had questioned her talents.

“I didn’t think that I would get to (play in college) because I didn’t think I was good enough but just thought I’d try, see if I could, because I love the sport,” she said. “So now I’m fortunate to be able to do it.”

The pursuit of her dream picked up in November or December, Goins said, when she contacted college coaches to express her interest in playing at the next level. Berea’s coach then started recruiting her and offered a spot on the team.

“It wasn’t real serious until a couple weeks ago, and we sent him some videos, and he was just like, ‘I want you on my team,’” Goins said.

“Getting to play in college anywhere I feel like is an accomplishment,” said Goins, whose primary position is catcher. “I’m just excited to be able to play for them.”

Franklin Monroe softball coach Mike Morris said he’s extremely proud of Goins. In more than two decades of coaching, Morris had a baseball player get drafted and another go to Wright State University, but Friday was the first time he was part of a signing day ceremony.

“I’m proud of her,” Morris said of Goins. “In 21 years of coaching, this is my first that really signed so I’m excited for her. It’s great she gets to continue. What she wants to do is play softball, and she gets to play for free so it’s a good deal.”

Goins plans to study nursing while in college. She was drawn to Berea because of its strong nursing program and its Tuition Promise Scholarship, which pays the expenses of a bachelor’s degree.

“They offer a tuition-free Promise Scholarship so my tuition is paid for, and they have a really good nursing program,” Goins said. “It seemed like the best option for me.”

As a softball player, Goins brings a lot of leadership and a great work ethic, Morris said. She’s also a strong hitter as she led the Jets with 28 RBIs as a senior and was second on the team with a .438 batting average.