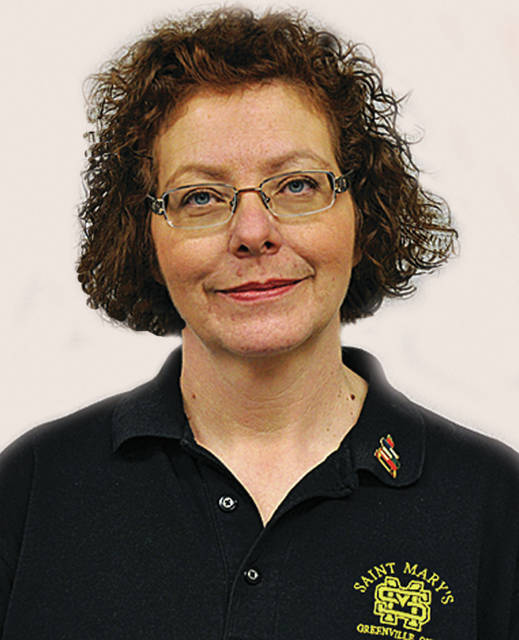 Once again I am being observed by a pumpkin patch of grocery sack jack-o-lanterns and a clutter of lunch bag spiders. (I actually looked up what a large group of spiders is called and it is a clutter. Learn something new every day!) This year the pumpkins are really keeping an eye on me. While rummaging around the art room, I found some extra-large shaky eyes. So after the children painted on the jack-o-lanterns’ faces, they glued the shaky eyes inside the traditional triangular eyes. It’s pretty effective. In fact the one on the end is giving me the creeps. He has a nasty sneer.

Last month I told you about the Knights of Columbus fund raiser that was underway to collect money to build a well for the Ulu village in Africa. Our goal at school was to raise $1,000 to donate to the project. I am proud to announce that the staff and students surpassed the goal by collecting $1,205 which was presented to the Knights of Columbus, represented by Grand Knight Luke Stachler, and Knight of Columbus Max Litke, who spearheaded the project. On Sept. 26 the Student Council sponsored “Favorite Color Day”. Students wishing to be out of dress code and wearing their favorite colors were asked to bring in a donation for the Darke County Humane Society. A check for $177 was presented to the Humane Society. Currently the students, along with the parish and the Parish School of Religion are collecting money in baby bottles to benefit the Elizabeth New Life Center, which serves women facing unexpected pregnancies.

Our school participated in the Greenville Homecoming Parade on Sept. 27. I wasn’t sure if my new hip was quite up to walking along the parade route so I opted to wave from the sidelines. After all someone has to watch the parade, right?

This week is Fire Prevention Week. Each class entered a poster in the Greenville Fire Department poster contest. Because I have two classes in my room, we entered two posters, one for each grade. I had the children make thumbnail pictures and then the class voted for the best from each class. The voting process in my classroom is a little different. I had all the children vote for the four pictures from each grade that they liked best. This ensured that I would not get 17 first place winners. After we narrowed the field down to four for each grade, we voted again for the best two and after one more vote we had the top winners. The winning artists then drew their posters again on the required poster board. Of course it is very gratifying to have one’s poster chosen to represent the class, but the best part was that the artists didn’t have to do any seat work that day. They just worked on their posters. It doesn’t get any better than that.

This week the students made cards of appreciation for the veterans who would be traveling to Washington D.C. on Oct. 27 as part of the Honor Flight. If you are unfamiliar with Honor Flight, the organization flies military veterans to the capital so they can visit the memorials that honor them and their service to our country. En route the veterans have mail call during which they received cards and notes of appreciation from children and adults from around the country.

My class and I will be out and about this week and next. On Oct. 12 we will visit the FFA Farm and Safety Awareness Day sponsored by the Greenville High School Future Farmers of America. My second graders are especially thrilled. They get to go again. Because I have a combined class, the FFA was kind enough to invite both classes. The following week, on Oct. 17 the preschool through second grades will be going to Brumbaugh’s Fruit Farm. It is probably the most highly anticipated field trip of the year. The children get to see how the apples are picked, processed and stored. They go on a hayride through the orchard and get to pick their very own pumpkins. The adults get to visit the bakery.

We will be celebrating Halloween on Friday, Oct. 26 with our traditional costume parade followed by the classroom parties. The eighth graders will also transform part of the cafeteria into a haunted something. So far they have been very tightlipped and I haven’t heard anything about their plans. However the scariest part of the day is that first quarter ends which means report cards are just around the corner!

The kindergarten through fourth graders will don their Halloween costumes on Oct. 31 and travel to a couple of local retirement homes to entertain the residents with Halloween songs.