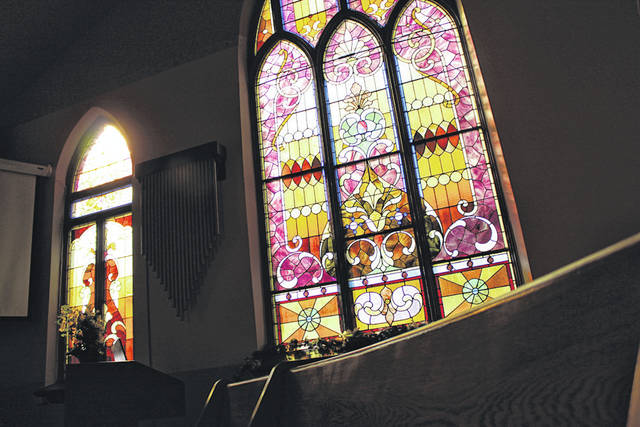 ANSONIA — In a scene sadly repeated in many rural communities of late, a local congregation in Darke County has held its final church service and will shut the doors to its sanctuary.

Following that Sept. 30 service, along with the resignation of its 44th pastor, Rev. Lowell Miller, Ansonia Christian Church announced it would close, ending a 161-year tenure, beginning with the church’s founding in 1857.

The current church building was constructed in 1893. Over the years, the church was active in the Ansonia community, holding a women’s fellowship, adult and youth choirs, AWANA, as well as staging election day suppers and Easter Sunrise and Christmas Eve services.

The resignation of the pastor, declining attendance and the age of its members are among the reasons Ansonia Christian Church decided to close its doors.

“Obviously I’m very saddened to see it happen,” said Rev. Miller, who spent the last 13 years of his 57-year career ministering at the church. “I’m saddened to see any church in Darke County or anywhere closed when the need for the Gospel is so great in our generation. It’s a very sad commentary on our nation and on our whole society.”

“They have stuck by the church, working to try to keep it open. I call them my church family because they’re like brothers and sisters to my wife and I,” he said. “I love them dearly. I’m so saddened for them this had to take place.”

A few weeks after its final worship service, Joyce and Don Walters, members of the church for 62 years, allowed The Daily Advocate inside to photograph the church’s sanctuary and stained glass windows, their vibrant colors aglow with morning sunlight.

“There’s a lot of memories here,” Joyce Walters said. “Our kids going to catechism. Our son, when he passed away, was here in the church. The members here, we’ve known them all our lives.”

“It’s like our family now,” said Don Walters, who served as the church organist.

In addition to many worshipers growing older, there is an overall trend of declining church attendance in the United States. A Pew Research Center survey (https://pewrsr.ch/2KmGbhK) conducted Dec. 4 to 18, 2017, shows while many Americans maintain faith in Christianity, they don’t necessarily see church attendance as essential to practicing that faith.

Among the Ansonia Christian Church faithful, there is shared a sentiment that American society has not only abandoned God but forsaken church on Sundays in the pursuit of other interests.

“It’s sad that it has to come to this, but we’re not the only church. Other churches are closing or their attendance is going down,” Joyce Walters said. “Parents need to get these kids back in church. It upsets me on Sunday morning when I drive in Greenville and see hundreds of kids out there playing ball. They should be in church. And it’s all over, not just Darke County.”

“Centuries ago, their joy was being able to build beautiful churches, to make a place of worship of the true and living God. Look around you today. Where are we spending our money as a nation? It’s not building churches; it’s building sports arenas,” he said. “Today our society is bent on pleasure. There’s no end to the amount of money they will spend to satisfy that desire for their pleasure, and God is totally forgotten.”

Connie Michael, the church treasurer, has attended Ansonia Christian Church since she was 8 years old, more than 70 years ago.

Don Walters, Joyce Walters and Michael all said they are still in the process of choosing a new church to attend.

“I’ll choose one eventually,” Michael said. “I’ve been invited to five or six of them.”

“We all have,” Joyce Walters added.

Although the closure of Ansonia Christian Church brings sadness for its members, there is a ray of heavenly sunlight among the clouds, as the building will neither be sold nor abandoned to the elements. Nearby Ansonia Church of God has voted to accept ownership of the church property, with plans to use the building for a youth outreach ministry. Final details of the transfer are pending.

While the closing is bittersweet, Joyce Walters said she is nonetheless happy knowing the building will continue to be used for a Christian function.

“It takes the youth to carry on because the older people get sick and pass away. There has to be a way of keeping and bringing in young people. We need to get our youth back into our churches,” she said. “[Ansonia Church of God] has a good youth group, and hopefully it will grow, and they can use this building to help them.”

“I’m thankful another church is taking over the building and it will continue to be used to the glory of God,” Rev. Miller added.