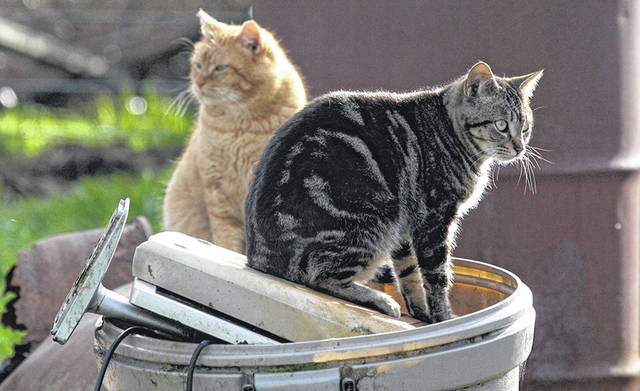 DARKE COUNTY — The City of Greenville and other communities in Darke County have an unwanted cat problem.

“It’s a proven fact that one male, one female and their offspring can produce a million cats in a 10-year period,” Darke County Humane Society President Judy Francis said.

As a result, the Darke County Animal Shelter has stopped taking in unwanted cats, and the Humane Society is having a hard time picking up the slack, according to Francis.

“There’s no imaginable way we can take on all the unwanted cats in Darke County,” Francis said. “We’d need a building the size of Walmart, and that thing would be full in six months. We can only take cats that have emergency medical needs and kittens that need to be bottle-fed.”

Colonies of stray cats can cause a number of problems for the community, Francis said, including noise, destruction of property and, most insidiously, conflict between neighbors.

“Neighbor hates neighbor because some feel bad and decide to feed the cats,” Francis said. “They say if you stop feeding them, they’ll go away. Which is totally untrue, by the way.”

Some advocate killing stray cats to reduce their numbers, but even such an extreme measure doesn’t do much good, according to Francis.

“Killing them doesn’t work,” Francis said. “As long as there is a food source, more cats will come.”

The solution, Francis said, is to reduce the stray cat population through attrition.

“We’ve been working on a trap-neuter-return program,” Francis said. “But lacking the support of the people and the county officials, we can only do so much. The City of Greenville is helping us, but the county claims they don’t have any way.”

Under the TNR program, cats brought into the Humane Society are neutered and then released, rendering them incapable of producing more offspring. As a result, colonies of stray cats gradually will shrink, as a colony will not accept new members from outside its bloodline. Francis said that similar programs have been implemented successfully in cities such as Washington, D.C., Tampa and Atlantic City.

“It’s the one program that works,” Francis said. “It’s been tried in big cities, and it’s been very successful in cutting the population. But it’s also a costly program, and the Humane Society has put a good $40,000 into it.”

“We do a tremendous amount,” Francis said. “But we could do more if the county commissioners would help out. And we could a lot more if the people of Darke County would help solve the problem.”

Supporting the Humane Society’s efforts is in the best interest of Darke County residents whether they are cat fans or not, according to Francis.

“If you like the cats, you can help the cats,” Francis said. “And if you don’t like them, you’re still helping to reduce the population.”

As for county support, Darke County Commissioner Matt Aultman said that dealing with stray cats is not a part of the county government’s mandate.

“Per the Ohio Revised Code, the county is responsible for dogs, not cats,” Aultman said. “The feral cat problem is a municipal issue, and every municipality in the county has ordinances in place.”

Francis said she was grateful for the work municipal governments have put in.