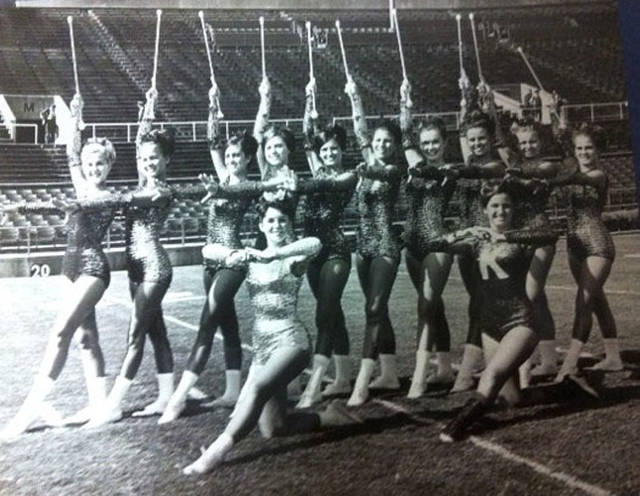 LEXINGTON, Ky. – During the University of Kentucky versus University of Georgia football game on Saturday, the 1968 Sweethearts will return to celebrate 50 years of the Sweetheart Majorettes with the UK Alumni Band during halftime.

The first line of Sweetheart majorettes made their debut in the fall of 1968 on old Stoll Field during the halftime show of the UK Marching Band. Bradford High School graduate Cherie Hubbard Roeth was selected to be one of the two feature twirlers.

The UK Marching Band added female musicians to the band in the fall of 1968 and a line of majorettes called the KY Sweethearts.

One of the 1968 Sweethearts recalled the spring tryouts, “There were over 150 girls competing to be one of the 10 line majorettes. I will never forget walking onto Stoll Field and every yard line had girls lined up across the field. I just knew there was no way that I would be selected for one those positions. But, when the tryouts were over I was one of 12 who remained on the field and was congratulated by the director for being selected as one of the first of what would become a tradition at the University: the Kentucky Sweetheart Majorettes (10 on the line and two featured twirlers)!”

Twirling is a dying art, and the 1968 Sweethearts are hoping that their publicity campaign celebrating their 50th reunion will bring donations to the newly established scholarship at the UK Philanthropy Department: UK Sweetheart Majorette Scholarship Fund. Majorette scholarship programs have been established at most of the SEC schools.

To quote one of the 1968 Sweethearts, “We must bring twirling back to Kentucky high schools to feed into the UK majorette program, and if we can offer some scholarship money that will make twirling even more attractive at UK.”