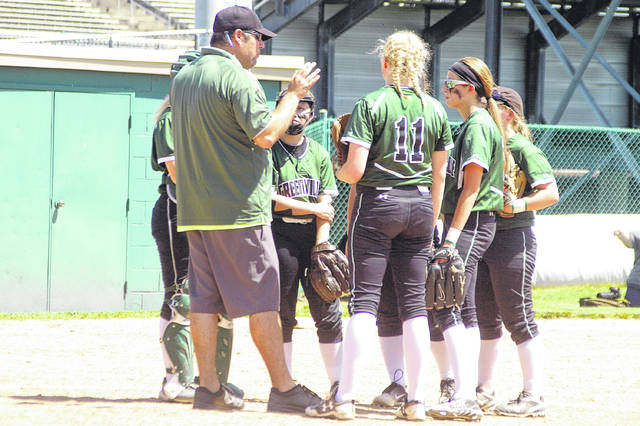 GREENVILLE – In 16 seasons as Greenville’s softball coach, Jerrod Newland had accumulated more than 400 wins (423-84) with 15 years of 25 or more wins, won numerous district championships and the 2007 Division II state championship.

Those are among the many reasons Newland was recently announced as one of four new members of the Ohio High School Fastpitch Softball Coaches Association Hall of Fame Class of 2018.

Newland said he learned of his selection from his father Greg Newland, a longtime softball coach at Springfield South who is also a Hall of Fame member having been selected in 2008. They are the first father-son duo to be members of the Hall of Fame.

“It’s really a neat thing,” Newland said of joining his father in the Hall. “My dad was the A.D. and softball coach at Springfield South for many years and I helped him coach softball for five years before I came here to Greenville. I came here on Feb. 3, 2003, so just before the season started and said we would win 20 games. We did and the fever just caught on.

“This community is full of good people and families and they all just bought into the system,” he continued. “When I talk to people I like to listen to them say ‘we’ and ‘us’ and it just makes me proud as a coach because it is Greenville softball, not Newland. It’s really neat for the kids and the program. It’s kind of like the icing on the cake a little bit.”

The true icing on the cake for the program came in 2007 though when the Lady Wave won the Division II state championship with a 1-0 victory over St. Marys Memorial. Greenville scored its only run in the bottom of the sixth inning when pinchrunner Kaylin Cates scored from second base on a two-out double by Abbie Shell. Shell then came in to pitch the top of the seventh getting a strikeout and two ground outs to win the title.

“That was an amazing game,” Newland said, also reflecting on the Lady Wave’s state title bid in 2012. “We were up two runs with four outs to go in the 2012 state title game. That was an amazing game too. I’ve really enjoyed the journey. A lot of great kids and great families, and a lot of great memories that we will be able to share for a lifetime and that is a really neat feeling.”

Greenville ranks ninth overall in wins all-time with 746, according to the Ohio High School Athletic Association’s record books. The Lady Wave also have won 11 of the last 13 district championships.

“Honestly, it’s amazing at how it all came to be with where we are at and where we are going,” Newland said. “It’s about dedication and winning district championships and 25 games a season. Anything less is disappointing, so we all get to roll up our sleeves and get to work and play the game we love. It’s just been a really fun ride here.”