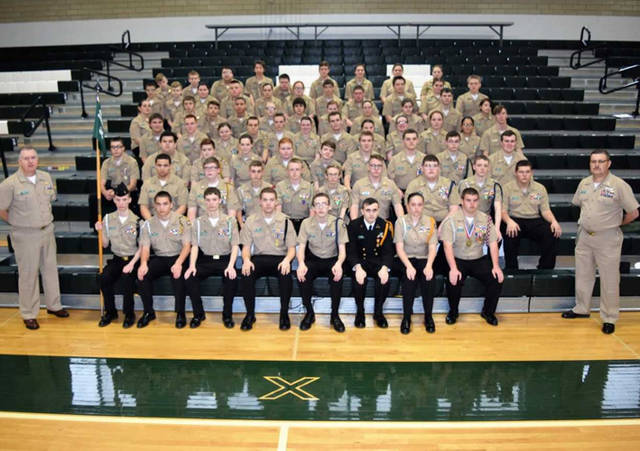 GREENVILLE – Greenville Senior High School has a Naval Junior Reserve Officer Training Corps program that is being recognized throughout the country.

For the 2016-17 school year, the Green Wave Navy was recognized as the most improved unit in Area 3 along with receiving the NJROTC Unit Achievement Award. Area 3 now consists of 54 schools from West Virginia to Nebraska and Kentucky to Michigan.

For the most recent school year (2017-18), the unit was recognized as a Distinguished Unit with honors, the highest unit award offered to a NJROTC unit. Greenville was one of only two schools in the state of Ohio to receive this award, and it awarded to only the top 20 percent nationally.

The program has been growing in the last few years and currently has 103 students enrolled.

The public is invited to this years Pass and Review ceremony, which will be held at 11 a.m. Nov. 29 in the Greenville Senior High School gymnasium.

The NJROTC program is not designed to get cadets (students) to join the military, but instead it teaches cadets respect and responsibility. NJROTC is a group that acts like a family. When any cadet has a problem with any subject in school, the other cadets come together to help explain the subject. They also are there to help when another member is going through a personal struggle.

“The whole point of NJROTC is to make better citizens – to make students more aware of what is out there,” Naval Science Instructor Chief Petty Officer Stephen Eldred said. “It teaches them about history, manners and good citizenship. That is our whole point. They can get a benefit from us with no requirement to join the military, whatsoever.

“We have kids from every facet of the school that represent the full spectrum of academic achievement and activity involvement,” Eldred said. “We have cadets that are involved in sports, band, Wavaires, the school academic team, etc. They all come together as one big family and look out for each other.”

Eldred also is excited about the growth of young women in the unit. In the 2016-17 school year, the unit was only about 25 percent women. It is now close to 40 percent. Greenville would like to see the unit get closer to a 50/50 split.

“The Navy requires us to teach equal opportunity, anti-bullying and sexual harassment courses. We don’t segregate or treat anyone different for any reason,” Eldred said.

Because of its diversity in students, it also offers built-in tutors for students to help each other within the unit.

“All students fit in somewhere into NJROTC,” Eldred said.

Normally Thursdays are uniform days at the school and all members are expected to be in their uniforms for inspection.

According to Eldred, the kids are taught military knowledge, discipline and a lot of respect. Through that, they learn self-reliance, independence, self-confidence and building their character.

“Who are you when nobody else is around?” Eldred asks them. “It helps the kids think the right way and do the right things.”

Recruitment is very important, and the Green Wave Navy is excited about what the program has to offer Greenville’s kids, which includes a wealth of opportunities and activities. Activities include various drill teams, offered in both armed and unarmed versions.

Color Guard is another activity the public sees performing often. Students must pass certain standards to qualify to be on the Color Guard. In the past year the Color Guard participated in most of the local parades, Memorial Day events at Pleasant Hill, Ansonia and Abbottsville. It has also presented colors at Columbus Blue Jackets, Dayton Dragons and the Cincinnati Reds games. Most recently, the Green Wave Navy Color Guard presented colors during a Miami University football game in concert with Miami’s marching band.

One activity offered is orienteering; the unit competes at the national level. Orienteering is when students are given maps with indicators on it of where flags and markers are out in the woods. The compass is used with the map to find those flags and indicators. The goal is to find the most indicators the fastest. A whistle is used if a person gets lost. For the 2017-18 school year the unit was one of just two schools to represent Area 3 in Navy Nationals held in Orlando, Florida.

Another program, the Civilian Marksmanship Program, is available for students to join. The Civilian Marksmanship Team competes using pneumatic air rifles to shoot .177 caliber pellets. In November, the team went to CMP Headquarters, in Port Clinton to compete. American shooter Ginny Thrasher won the first gold medal of the Rio Olympics, in August of 2016, pulling off an upset in the women’s 10-meter air rifle event. She was an NCAA champion at West Virginia University, competing in her first Olympics.

Other NJROTC activities include the Athletic Team, Academic Team, college visits and military base orientation trips to places like Norfolk, Virginia, and Paris Island. This year the instructors are planning to take a trip to Washington, D.C. in the second semester time frame.

To accomplish these many activities, the unit requires financial support. In the last two years it has received more the $10,000 in donations each year. The funds are used to help reduce the cost of activities for the cadets and to pay for the competition they participate in.

This year fundraising efforts have fell short by more than $6,000 in donations. The unit is asking for the residents of Greenville and Darke County to show their support by helping with a small donation.

All donation can be sent to the Green Wavy Navy, 100 Greenwave Way, Greenville, OH 45331. Checks should be made out to Greenville NJROTC Boosters.