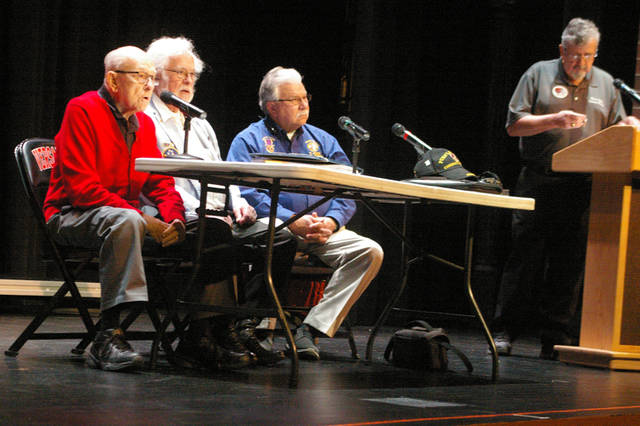 VERSAILLES – Veterans from World War II, the Korean War and Vietnam War told Versailles High School students about the horrors they faced – and the pain they still endure – during a presentation Wednesday afternoon.

World War II veteran Harry Ashburn, Korean War veteran Don Earnest and Vietnam War veteran John Looker each spoke during an hour-long presentation that was emceed by Vietnam War veteran Mel Shane. Decades after they returned home, the pain from there time in the service still remains a part of their daily lives.

“I went back home, and people didn’t realize what we had been through,” Looker said of returning from Vietnam. “They thought we were on vacation in a nice sunny part of Vietnam. So I kind of carried a lot of the stuff that I still carry today. It’s going to be 50 years since I was wounded in Vietnam, and as the other two gentlemen said, I still have the nightmares. I still see a psychiatrist once a month. I still isolate myself from people.”

Approximately 10-and-a-half months into an 11-month deployment in Vietnam, Looker was seriously injured when he was shot in the right shoulder by AK-47 tracer round when his unit of 26 men was surrounded by hundreds of North Vietnamese soldiers in a rice paddy.

“The first one shot was the new guy next to me – he was actually between (my friend) Billy and I,” Looker said. “He took a head shot, dead immediately.”

Some members of the unit were able to get to a ditch that provided some cover, including Looker.

“I could see (the North Vietnamese soldiers) setting up mortars, and they were no more than from here probably to the door away from me so you could see their faces, you could see them setting up their machine guns, their mortars and firing at us,” the Sidney High School alumnus said.

The fight began around midnight and continued for hours. Looker was shot around 4 a.m. but continued to battle as long as he could.

“I was able to fight with my left hand for a while until it got to the point where I couldn’t,” he said. “Billy was next to me. Billy ripped off his T-shirt, stuffed me back into the ditch, and he got sitting on my shoulder to keep me from bleeding to death.”

The fight ended around 6 a.m. when helicopters were able to reach the American soldiers and rescue them. Looker then spent time at hospitals in Guam and Valley Forge, Pennsylvania. Even though he nearly lost his arm to the gunshot wound, Looker said there were men with injuries much worse than his – including those who lost arms and legs – and many who didn’t survive.

Though he didn’t detail his time in the military like the three panelists, Shane did talk briefly about a friend who died in Vietnam.

“When you’re 10,000 miles from home and you barley know anybody, finding somebody from Ohio is just one of the … you don’t care whether they’re from Steubenville, Cleveland, Toledo or Coldwater or Marion Local,” the Miami East graduate said. “The best friend I made in that time was from Bellevue, Ohio, a little town up by Cedar Point, and two weeks after we got there he was killed in an ambush.”

Ashburn, who served in the Pacific Ocean theater of World War II, also spoke of the loneliness that comes during wartime. He went almost three years without leave and traveled from island to island in the Pacific, which made corresponding with family back home very difficult.

“At one period in time we went two months without any mail,” he said. “When you’re over there, in those situations, you like to have that (and hear from home).”

Earnest grew up in poverty in West Virginia – to the point he couldn’t afford shoes – but still was greatly affected by the conditions he saw people living in while he served in Korea. Cities were destroyed and people lived in rubble with little heat or clothing.

“The kids themselves fought each other over food out of the garbage cans that we, the United States Army, put in the cans,” Earnest said.

Earnest was particularly moved by one little girl with rags wrapped around her feet and only a piece of burlap for clothing. Thus he sent what money he had home to his mother in West Virginia to buy supplies for the Korean children.

“Even though we were dirt poor, she would go to the Salvation Army, buy clothes and mail them to me, and I would give them to these kids,” Earnest said, adding other Americans did the same. “I was real proud of that.”

A couple years ago Earnest went back to South Korea to visit and found a modern country with high-speed rail, highways and kids dressed in nice clothing, but he still can’t get the image of the suffering from decades ago out of his head.

Earnest still has nightmares about his time in Korea.

Looker, who has been awarded two Purple Hearts and has another pending for his service in Vietnam, suffered from post-traumatic stress disorder upon returning to the United States and battled alcohol addiction. He still struggles with the pain caused by war but has found a purpose as a commissioner with the Warren County Veteran Services

“I found out that I really need to be out helping these other veterans,” he said. “There’s so many veterans out there that never told their story to their families, to their best friends, to anybody. And like Mr. Ashburn said, the best thing you can do is go up to that veteran and say, ‘Thank you for your service.’ And if you have time, see if you can spend a little time with him. You never know, you might be the first one he’ll ever tell his story to and you don’t know what kind of pressure that takes off of him.”

Versailles High School social studies teacher John Jackson, who served in the Marines, said he thinks the stories of the veterans really touched the Versailles students.

“The presentation put on by the social studies department was more than eye opening for many students,” he said. “Not every one is exposed to veterans or their stories. Many students have been taught about the wars and have been explained about the horrors and misfortunes of others. But the vets who spoke to the students today told them from experience. Education is always about sources, and here were three living primary sources of wars or conflicts forgotten or passed over through time. Yes, many people can talk of what they’ve learned in school about WWII … but fewer and fewer can actually tell you firsthand what happened. That’s what I think affected the students.

“Korea and Vietnam are the forgotten wars, overshadowed by the ideology and concept of the Cold War. But today, students got a chance to hear that these veterans were never welcomed home, that society has removed them from the textbooks and that there were hundreds of thousands of men and women who fought and died in conflicts that happened after WWII and before the Afghan or Iraq War.”

Along with the stories from the veterans, students listened to a concert of patriotic music by the band Thien Snipps. Veteran and Miami Valley Veterans Museum Curator Terry Purke also set up a display of artifacts from World War II, the Korean War and the Vietnam War. 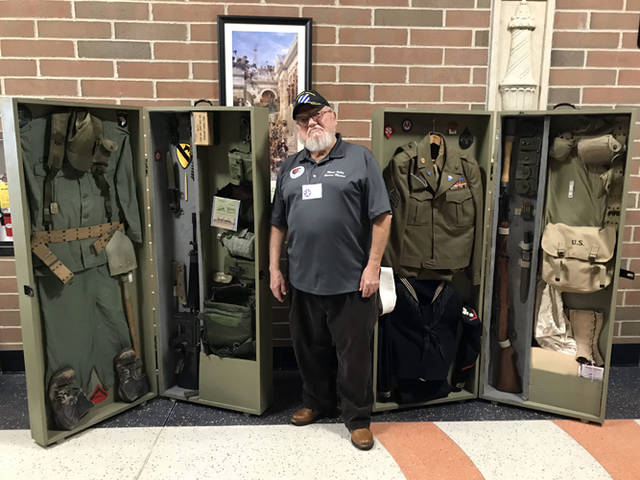 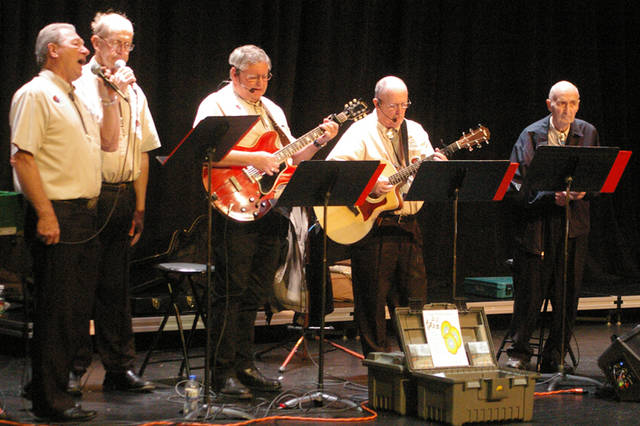