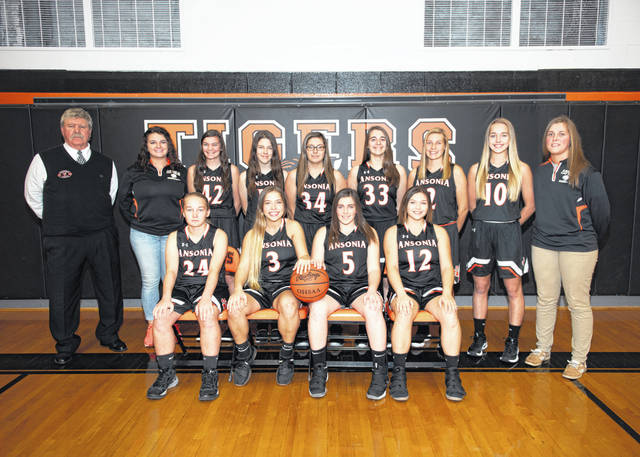 ANSONIA – The expectations are always high for Jim Bolin and the Ansonia Lady Tigers basketball team, and despite being rather young and inexperienced at the varsity level this year is no exception.

“Our expectations are that we always want to win the conference,” Bolin said. “You always want to have a winning season too. I expect that every year. You have to have a goal set because if you don’t anything can happen. I’ve been doing this for 39 years and this is my sixth season here, but we just have to go out and play and as the kids mature we should get better. I think we have a chance to get better each and every game out, but the kids have to buy into it. That is the key.”

The Tigers had an uncharacteristic 5-18 campaign last year, Bolin’s first losing season in the Ansonia orange and black, but he admits with his youthful squad they are kind of in a rebuild mode.

“This is a rebuild,” Bolin said. “We have some good players on JV and a nice bunch at junior high too, so we are looking to go out this year and hopefully have some success and build off that.

“Last season we didn’t do as well as we anticipated,” he continued. “We anticipated having a better season than we did but it just didn’t work out. We didn’t score the ball like we could and we turned the ball over more than we should have. It just didn’t turn out right. We had three seniors last year so we are looking to full those spots, but with that being said we do have a lot of talent coming back so we will just have to mature as we play.”

This years two senior leaders are Trinity Henderson, a 5-foot-2 guard, and Heidi Runkel, a 5-5 guard. Their leadership and the way they mesh with the younger players will be a huge key to Ansonia’s success.

“Trinity is a good leader,” Bolin said. “She is just go-go-go like the Energizer bunny. She never runs out of energy on either defense and offense.”

There also are two juniors – Abigail Powers and Makayla Stover – to help the seniors with leadership, but the remainder of the 11-player squad is made up of five sophomores and two freshmen. What the Lady Tigers lack in experience, Bolin says they make up for in talent. There are four or five perimeter shooters on the roster, he said. including sophomores Rylie Marker (5-5 guard), Sky Edwards (5-4 guard), Mariah Troutwine (5-4 guard), as well as freshmen Emily Wright (5-5) and Lauren Burns (5-6).

“They all will see a lot of action for us,” Bolin said. “Then we have sophomore McKenna Obringer, who will play forward for us, and sophomore Keirra Reichert at 5-10 will be our post player.

“Everybody is going to see a lot of action because of the type of ball we are going to play,” he continued. “We like to get out a run if the opportunity presents itself and we will be aggressive on man-to-man defense so everybody should see a lot of action.

“We don’t have a whole lot of height,” he continued. “Our tallest girl is 5-10 so we will just have to work hard on boxing out and whatever we have to do to get rebounds. Like I said we will run whenever the opportunity presents itself and we will be real aggressive on defense. We just have to get to know each other more and work harder this season than anybody else because of our height disadvantage. As far as our experience we will just have to learn as we go. It is basically going to be on-the-job training.”

The on-the-job training aspect of it is good for the programs future, but could spell some growing pains this year until the chemistry comes together.

“They are going to make mistakes, and as a coach you kind of allow for that with younger players,” Bolin said. “The sooner they mesh and get that chemistry between the younger and older players is going to be the key to our season. Getting to know what each other is going to do and what each other can do.”

Bolin also said he thinks this year might be one of the most competitive he’s seen in the Cross County Conference. He thinks about eight teams will be among the upper echelon in the league making it harder than ever to compete night in and night out.

The CCC is going to be tough this year,” Bolin said. “Of course Tri-Village is going to be up there. Then you’ve got Covington and Miami East and Newton. (Twin Valley) South and (Tri-County) North are right there too. Arcanum is going to be good. So is Franklin-Monroe and I think Bradford will be good too. It’s just going to be tough. We have some real tough teams on our out-of-league schedule too, so it is pick your poison.

“You just have to go out every night and play to win,” he continued. “There are no cupcakes. It’s pretty much like that every year, but it seems this year is stronger than it has been. We are going to have to go out every night and play our best game. We can’t turn the ball over and we have to shoot the ball well. We have to do fundamental things and be sound on boxing out. I think we can compete. We did real well against Russia in our first scrimmage and that was encouraging because the Shelby County League is a little rougher. We have a good group of kids who work hard and you know hard work produces rewards and so we just have to come out and work hard and see what happens.”