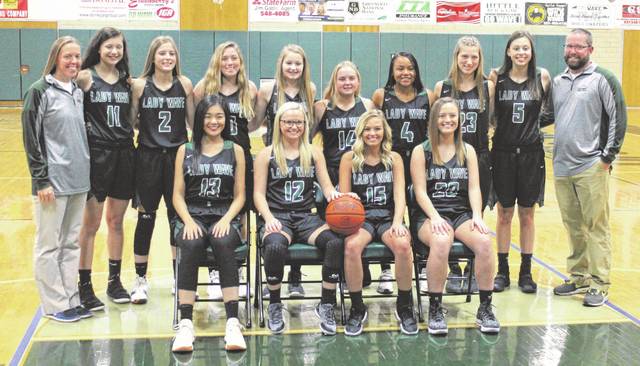 GREENVILLE – Things are going in the right direction for the Greenville Lady Wave basketball program as Rachel Kerns enters her fifth season as its head coach.

The team suffered an 0-23 season the year prior to Kerns taking over and since then the varsity team has won one game the first year, two the second year, nine the third year and then last season had its first winning record (14-10) since going 12-11 in 2013. Last year also produced the Lady Wave’s first playoff win since 2011.

“This is my fifth year so everyone knows our way and how things are going,” Kerns said. “We haven’t had a change on our coaching staff in grades 7-12 in five years and I think that consistency is why some of that success is starting to be seen. Things are going in the right direction. We’ve seen improvement at every level every year and we’re not ready to stop yet.

“I think consistent coaching and the girls buying in and doing what we ask is a big reason,” she continued. “They know the expectations and the level we need them to go. They know the offense and the defense and I think with not having to relearn everything every year you are able to start off with a better advantage than what you had the year before.”

Speaking of the year before, Kerns lost only two seniors from last year’s squad – Payton Brandenburg and Cassie Cromwell.

This year, Greenville will have four seniors on the roster in Koryann Elliott, Jada Garland, Saki Nakamura and Lani Shilt. Three of them were starters last season along with returning point guard Morgan Gilbert, a junior this season. Gilbert, junior Haleigh Mayo and Garland were the top three scorers for the Lady Wave last season, so much of their offense returns as well.

“We bring back the majority of our offense from last year,” Kerns said. “We lost a really good defender and a four-year player with an injury, but this is the first year we have as much coming back as we do. We are just really excited for what this season could hold for us.”

“I can’t say enough about our four seniors,” Kerns said. “They are setting the tone. Their leadership is great and they are really going to guide us this season. A lot of our wins and a lot of the good things that are going to happen will be because of our four seniors. Three of them are returning starters and they all will play significant minutes this year.”

After Gilbert and Mayo, the other juniors on the varsity roster are Annie Hayes, a 5-7 forward, Natea Davidson, a 5-8 forward, Chloe Sowry, a 5-5 guard, and Taylor Yates, a 5-3 guard. Two sophomores – Nyesha Wright (5-3 guard) and Abbie Yoder (5-10 post player) will also see some varsity time.

“Last season we finished at 14-10, a much improved season from the year before,” Kerns said. “Our expectations are that not only to compete in every game, but to win a lot of games this year. It’s not OK to just be in games anymore. We really need to get it to that next level. We want to win more than 14 games.

“The expectation is also to get a couple playoff wins this year,” she continued. “Last year we wanted to get one and we did, and then we ran into a really nice Carroll team. Hopefully, we can put ourselves in a position where we can get a couple of tournament wins this year, but obviously it is one game at a time.”

The season begins with the Annie Oakley Tournament set for Nov. 23-24 in the GHS gym with Eaton, Bradford and Ponitz CTC also on the slate. Then, Greenville’s next four games are at home with Troy (Nov. 28), at St. Paris Graham (Dec. 3), at Vandalia Butler (Dec. 5) and at Tippecanoe (Dec. 12).

“The GWOC is tough,” Kerns said. “We are in the same division as Tippecanoe and they have been dominant in basketball. Then there is Butler and Troy so it is a pretty rough start, but if there is ever a year for us to compete this is the year. There are no easy weeks in our schedule. We have to win the games we need to win and do the best we can in the other ones and go from there. We just have to keep doing the things we can do, control what we can and hopefully good things will happen.”