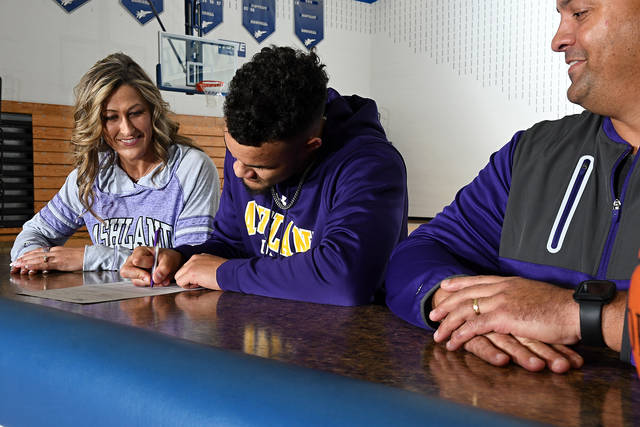 PITSBURG – The next stop on Ethan Conley’s journey through life will be Ashland University.

On Saturday, the Franklin-Monroe senior signed his National Letter of Intent to continue his education and athletic career as an Eagle in front of his family, as well as his coaches and teammates.

“The decision was more than just about basketball for me,” Conley said. “It is where I am going to go to school and the people I am going to be around for four years. I chose Ashland really because of the culture and the environment. When I stepped on campus I knew it was somewhere I wanted to be for four years. I felt like my teammates and the coaches would have my best interest at heart and it just felt like home.”

Ashland University is a private school located in Northeast Ohio. It is an NCAA Division II school that competes athletically in the Great Lakes Intercollegiate Athletic Conference. According to their website, AU has made more than 300 NCAA Division II postseason appearances combined since 1979, and has won 56 GLIAC championships since 1995-96.

Ashland was the first of several schools to make an offer to Conley, and it was the second school he went to on an official visit.

“They made an immediate impression on me,” Conley said. “On my unofficial visit they really set the standard. In the beginning of the whole recruiting process I was like this is it. I don’t think there is going to be any other school that can top this. They really went above and beyond to make me feel welcome and I really believe with all my heart that it is going to be a great four years.”

“I think Ashland is a tremendous fit,” Myers said. “Their coaches were the first ones to come down here and offer him and they never missed an event from that point until he committed. I think they deserve a lot of credit. That’s a two and half hour drive let alone if he was playing in Fort Wayne or Louisville or somewhere. They were at everything.

“They invested the most in him and I think he knew that at the end of the day,” he continued. “He knew for the next four years he better be somewhere where they are taking care of him and those coaches have been phenomenal. I’ve really enjoyed getting to know them. I think it it is somewhere he can go and play right away and I think ultimately that is what he wants because he is such a competitor. He wants to go and play. He doesn’t want to go somewhere and sit. He wants to play. I think it is a great fit.”

Being the consummate teammate though, Conley said he is not worried about playing time.

Conley does have a goal beyond college, however.

“I would like to play overseas after college,” he said. “That is my goal. It is going to take more work than what I am doing now so I am just looking forward to it and I am going to keep putting more work in. If it is meant to be, it is meant to be.”

“Ethan is a tremendous human being first and foremost,” Myers said. “To see a kid advance that has put so much effort in something is certainly a blessing for everybody. He has great parents and that is where it starts. Ever since he was a freshman we just tried to help him grow and get better whether that was physically or mentally as a player or whatever, we tried to help him everyday. We’ve had hard times and we’ve had disagreements, but at the end of the day he has always respected us. He has just grown in a tremendous way and he has been intentional every time he comes in the gym or every time he goes in the film room. There is a reason he is playing high level basketball. He is very talented, but he is very intentional about getting better.

“His story is really unbelievable,” he continued. “We took a whole day and did a core value on his story so our kids understood first what it was, and not only that I think maybe for our staff to understand how precious this all is. He has taught us that with how he plays. You look at him and know he shouldn’t be able to do the stuff he is doing, but through the grace of God first I think that he is able to do this, and then through perseverance and great intentional work he is able to be where he is at. It is a lesson for me personally.”

At age 8, Conley was diagnosed with a very rare virus that was attacking his muscles and it nearly cost him his life. The damage from the virus caused his blood to be filled with an enzyme called CPK. According to Myers, Conley had emergency surgery and was in the hospital for 33 days, which is why he wears the number 33. Miraculously, a few weeks after the surgery Conley began to show signs of recovery and has been fine ever since.

“He really is a walking miracle,” Myers said.

Conley himself admitted he was lucky to be alive.

“I just really want to thank God for placing me here because I shouldn’t be alive,” Conley said. “My dream was to play college basketball, so to have a variety of schools say we want you to come play for us is unbelievable and I am very, very fortunate. The whole recruiting process was a really great experience.

“I definitely feel relief now that this decision has been made,” he continued. “The pressure is off going into my senior year and I don’t have to worry about impressing anybody. I can just go out there, have fun and enjoy my senior year. I’m not going to get it back so I have got to make it be worthwhile. I definitely want to thank my family. Corina, Mom, Dad, Mason. Every time I might have felt down or doubted my abilities they always picked me back up. Whether I had a good game or a bad game they always encouraged me to keep going. I also want to thank Coach Myers. He is one of the most influential people in my life.”

Conley said he plans to study financial management at Ashland.

“It is a pretty surreal day,” Conley’s father Javan said. “Naturally, we are very proud of Ethan and all he has accomplished. He still has a lot of work to do, but he is with a great coaching staff (at Franklin-Monroe) and that is a big reason why we came out here was for him to develop as a person more than a basketball player. That was important to my wife (Rebecca) and I, so Troy and Zane and the whole staff have done a great job mentoring him and molding him into what we really aspire him to be which is Christ like. We are looking forward to the season and to him attending Ashland. They have a great coaching staff and the atmosphere there is similar to here. It is a really close knit culture.” 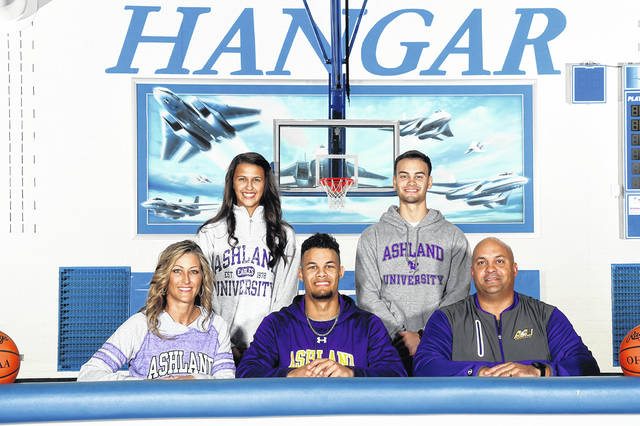 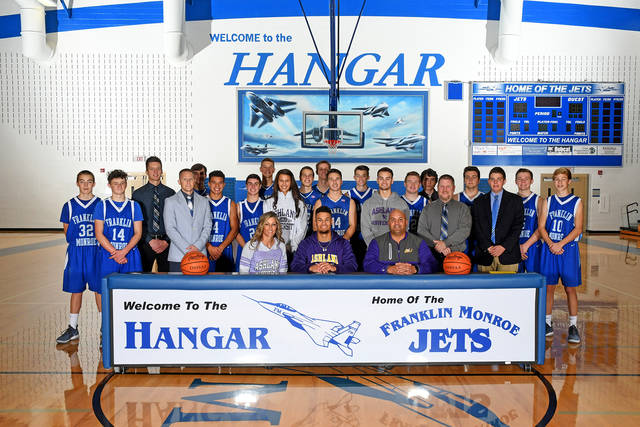 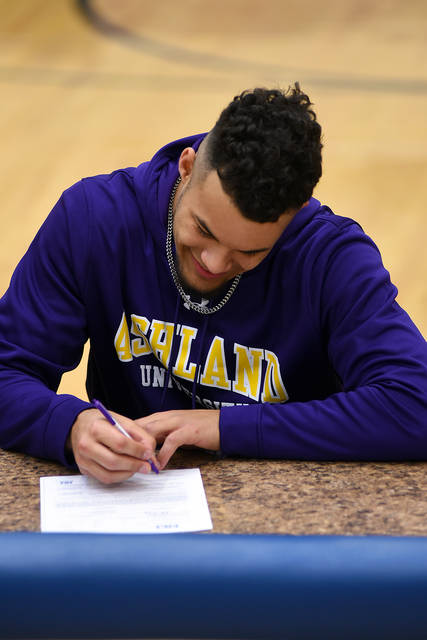 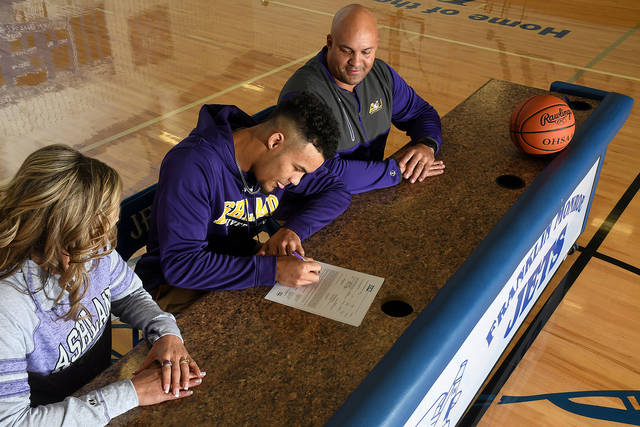