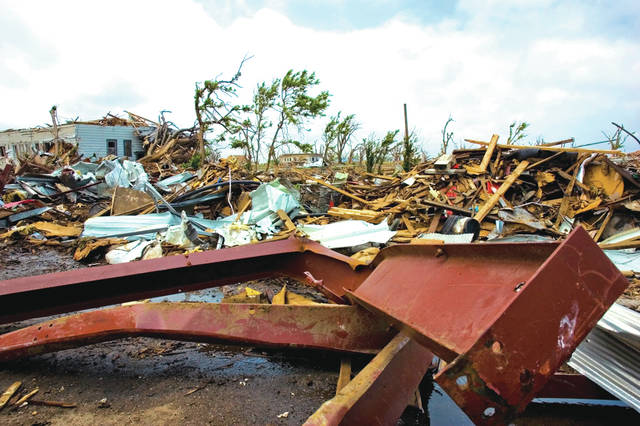 ARCANUM — The Darke County Office of Homeland Security and Emergency Management wants residents to be prepared in the event disaster strikes.

Kevin Johnson, who works as a planner and inspector for the Darke County Local Emergency Planning Committee, gave a lecture on disaster preparedness at the Arcanum Public Library last week, one of several such talks he gives each year. Johnson stressed that, in the event of a tornado, ice storm, flood or hazardous material spill, being prepared is often the most important factor.

“You need to be informed about what might happen, assemble a kit, have a plan and get involved in helping prepare your community,” Johnson said.

One tactic Johnson encourages is to shelter in place in the event of an emergency, rather than leaving your home to find help and possibly putting yourself in even more danger.

“This is especially important in the case of a hazmat incident,” Johnson said. “Get inside, close and lock all the doors and windows, turn off your HVAC systems and take shelter in a room near the center of your house. Then monitor social media or a battery-powered radio for any updates we might post.”

The urge to go out and rubberneck at the scene of a disaster can be very dangerous, according to Johnson.

“Whenever you have a fire, a train derailment or something like that, everybody wants to go see it,” Johnson said. “But there can be some pretty harmful stuff out there.”

The assembly of what he calls a 72-hour kit is equally important, Johnson said.

“It’s something you can have with you in case you need to take shelter or be evacuated,” Johnson said. “Or coming out of your safe room during a tornado. You’re going to be surrounded by destruction, so you need to have some supplies with you.”

A basic disaster supplies kit should have enough food, water, medicine and other supplies to sustain everyone in a home for at least three days, according to Johnson, as individual households may have to survive on their own for a period of time before help can arrive. Other important items include flashlights, first aid supplies and copies of important documents that might otherwise be lost or destroyed.

Johnson also encouraged Darke County residents to avoid driving down roads that could be flooded during inclement weather, as in addition to the danger of drowning, flood waters can contain hazardous substances such as sewage and various chemicals.

“The Red Cross has some good smartphone apps that can help you out,” Johnson said. “They can also give you warnings about hazardous conditions and such.”

Those looking for more information about disaster preparedness should check out ready.gov, the official website of the Federal Emergency Management Agency, Johnson said, as well as following Darke County Emergency Management on Facebook. Questions can be directed to [email protected]

“Things can go from normal to very bad very quick,” Johnson said. “So it’s best to be prepared.”