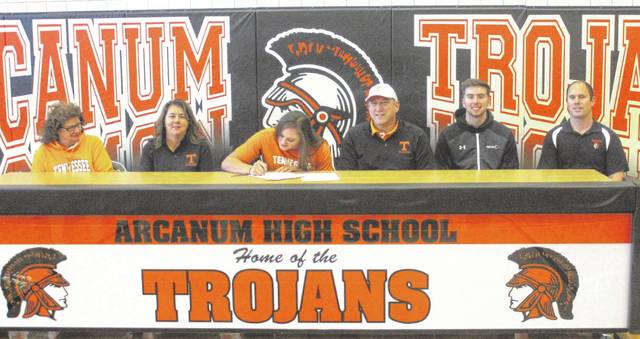 ARCANUM – With the stroke of her pen, Isabella Gable took the next step in her swimming career by signing her National Letter of Intent to compete with the University of Tennessee.

The Arcanum senior was surrounded by her family and friends in the Arcanum gym on Tuesday to make her commitment official.

“I am so excited to finally make it official today,” said Gable, who verbally committed in March to the Volunteers. “Tennessee has a great swim program and I love the coaches. I was able to go down there and I just love the team atmosphere and what they were doing there. They are making some great progress. I am excited to see what they do in the future and I am excited to be a part of it.”

“My goal this season is to definitely win state,” Gable said. “I’d like to break the state record in the 200 free and then I have a goal of 1:45 in the 200 free also. I’d like to hit certain times in the 50 free and the 100 back as well whether that be in the high school season or not. I swim all year round so that might be at a different meet, but I definitely want to go those times by the end of the season in March before I go to Tennessee.”

Gable certainly puts in the time and effort to achieve those goals. She’s at practice every morning from 5 to 6:30 a.m., then goes to her classes and back to practice from 4 to 6:30 p.m. every night, according to her father Jim Gable.

“She has worked extremely hard since she was 8 years old at the YMCA,” Jim said. “We are very proud of her and couldn’t be happier. She deserves it. She has put in a lot of time and effort and has gone through a lot to get here. She has definitely earned every bit of it.”

Isabella does have aspirations of going to the Olympics and plans to go to UT as soon as she graduates this summer to begin working for the Olympic Trials.

“I do still have aspirations of the Olympics,” she said. “I don’t make any promises, but it is definitely a goal and will always be a dream I have until the day I get done swimming.”

“Isabella is very special,” Arcanum coach Josh Artin said. “She is very talented and always willing to help the team. She is a great person to be a role model. She will show other swimmers what she has learned and help them further their skills as well. I know she looked at several different colleges, but I believe she chose the right school for the right reason. I don’t think she would have chosen it if her heart was in a different direction.”

Isabella was quick to thank her family, coaches and teammates for her success.

“I definitely would like to thank my family especially my dad for providing everything and my mom for taking the time to drive me places,” she said. “My brother too for always supporting me and definitely my teammates because they are the ones that kept making everything fun for me. Without my teammates this wouldn’t have been fun and there would have been no point in trying to achieve a dream.

“I went on so many visits and it was definitely exhausting,” she continued. “But it was such a fun process and I got to know so many new people and so many different coaches. I got to learn from all those coaches along the way too and that was really cool. I am really happy with the result. It was a fun process, but the end result is the best.”

“It was along process and she handled it very well,” Jim said. “She just fell in love with Tennessee when she went down there. The campus, the coaches and the teammates. She is looking forward to it. I am very proud of her.”

Isabella plans to either major in communications or business and then minor in the other.