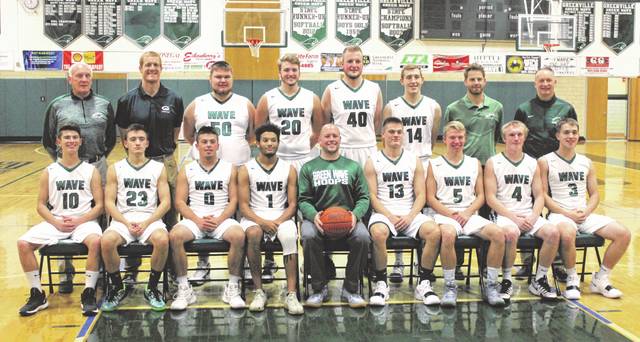 GREENVILLE – The rebuild will be in its second year for the Greenville boys basketball program when they open the season this Friday night at Troy.

For third-year coach Kyle Joseph, it is a chance to show the progress that has been made from last year’s 1-22 squad.

“Last year we struggled a lot after replacing some really good seniors from the 2016-17 season,” Joseph said. “We really didn’t have a lot of scoring, rebounding or even minutes back last year. We were pretty young and not a lot of experience at the varsity level, but we have kind of transitioned from the end of last season to our offseason stuff over the summer. Guys worked really hard and we saw some improvement there and we have continued to carry that over into our first couple weeks of practice.”

The Green Wave will have five letter winners back from last year including leading scorer Noah Walker (6-foot-1), who averaged 12.4 points per game his junior season.

“Noah Walker will be a senior captain along with Jordan Dill (6-0),” Joseph said. “They have done a phenomenal job from the end of last season in getting us to this point. These are two great, level-headed kids who are doing a good job of making sure everyone is on the same page and trying to move this thing along. Noah set a single-season school record for 3-pointers made with 73 last season. He has worked really hard over the offseason and I am looking forward to an even better senior year for him.”

Greenville will carry a varsity roster of 12 players, Joseph said, with about eight of them seeing significant minutes.

“One of the benefits to our team is we are pretty balanced in what we can do,” Joseph said. “I don’t think we have to lean on any one guy for any aspect whether that be ball handling or shooting or scoring. We have a lot of versatile guys who can be interchangeable and hopefully make it difficult for opponents to guard us.

“When we talk about guys who are interchangeable on our team, it starts with Noah and Jordan,” he continued. “Both can play some forward for us and some guard. They can do a little bit of everything. Another senior who will play a lot is Ethan Saylor (5-7). He is a a really hard-nosed kid who won our defensive award last year and he is playing with a lot of confidence right now. We also have four juniors who will play a lot of minutes for us.”

Those juniors include Marcus Wood (5-9) and Tyler Beyke (5-11), who are returning. Wood is currently injured and will miss some games.

“Marcus played point guard for us and actually led entire GWOC in assists per game last year,” Joseph said. “Tyler Beyke started last year and played a ton of minutes. He is a guard who is extremely competitive that gets after it on the defensive end.

“Foster Cole is a 6-2 forward and a really good athlete who will look to provide a lot of rebounding for us, but also help with an inside punch,” he continued. “Alec Fletcher is another versatile guy who at 6-1 plays the 3 and 4 for us. He can handle the ball some and he can post up some. He also is another guy who can get after it defensively and help set the tone for us that way.”

Sophomore Reed Hanes (6-0) also plays point guard and guard and can do a little bit of everything too, according to Joseph.

“He can bring the ball up the floor and get us into our stuff and can create stuff for himself and others, and he also is another guy who brings a lot of competitiveness not just to our games but to practices.”

“For us it is all going to start with what we do on the defensive end of the court,” Joseph said. “That is our offensive philosophy to be able to get stops and then get out in transition. With some of the versatile players we have that is a strength of ours. We are pretty good scoring in transition, but we have to get those stops first to be able to get into transition so that is where it all starts for us defensively.

“With that we really struggled to rebound defensively last year,” he continued. “We have spent a lot of time on that during the offseason. We are not super big, but we have some good athletes and some decent size and we have been rebounding the ball much better although we certainly still need to improve on that. The other thing is we have to continue to work on cutting back out turnovers. I know every coach in the state right now is saying we have to take care of the ball better, but we have to really focus on that and make sure that we are getting good looks every time.”

Greenville won the Greater Western Ohio Conference North Division title in the 2014-15 season. They went 18-5 overall that year and have gone 13-11, 13-10 and 1-22 since. This is the last season for Greenville to be in the GWOC and another division title would certainly be a nice way to end their time in the league.

“It is the last year in the GWOC and would be nice to get another one, but right now we are just trying to be focused on getting a little better everyday,” Joseph said. “If we can do that then I think we will put ourselves in a good position to be competitive in every game and hopefully be in a position to make a run come tournament time.

“Our schedule is pretty similar to what we have had for several years with the GWOC, but we have added Arcanum back on there which is nice to have another Darke County game,” he continued. “We also have Versailles and Tri-Village for more local games, and a few teams from up north in Coldwater and Fort Recovery. It is a good schedule that will provide lots of challenges in playing against some different styles which again help you in your league games an also in getting ready for any team you might face in the tournament.

“This is my third year here and we talk to these guys about what kind of foundation they want to leave for the teams 10 years from now,” Joseph said. “We certainly want to win games and have a good season as much as anything, but if you are not progressing you are not preparing yourself or getting the most out of the season you can. It is important whether you are winning or losing that you are moving ahead not only for tournament time but for the future.”