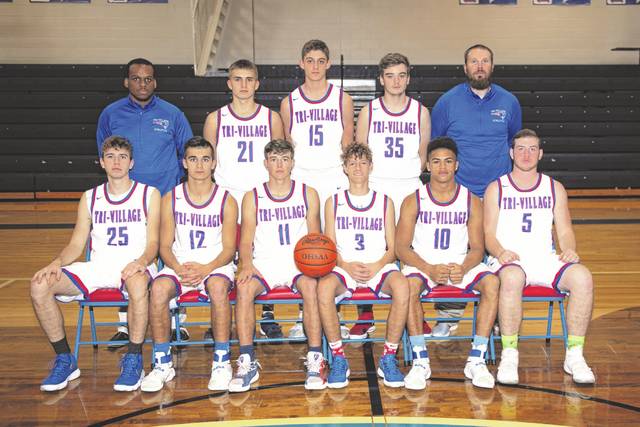 NEW MADISON – The Tri-Village Patriots are steeped in basketball tradition and despite graduating five seniors their goals never change.

Last year’s team also marked a new coach for the Patriots, Mackenzie Perry who guided the team to a third-place finish in the Cross County Conference and Sectional runner-up. The junior varsity team this year will be coached by Craig Alliston.

“Our team goals for this group is to compete in our conference and make it out of the sectional this year,” Perry said.

Tri-Village has six seniors and nine players on the varsity roster.

“The strength of our team this year will be our ability to take it to the basket and shoot the ball,” Perry stated.

“The keys for our success are to make playing defense a priority and protecting the glass,” Perry added.

The Patriots will look to the seniors to guide them and those players are Derek Eyer, Gage Hileman, Darrell Lee, Austin Bruner, Mason Coby and Mason Sullenbarger.

Derek Eyer is a 5-foot-10 returning guard who averaged just over 12 points per game. He can shoot the ball effectively from the outside, but also is strong with the ball going to the rim. Derek will be looking for a breakout year.

Gage Hileman is a 5-9 returning point guard who started 22 of 23 games last year. He does an excellent job of steering the offense and getting them into the right sets. Gage also is a deep threat and is capable of putting up points in a hurry when he’s hot.

Darrell Lee is a 6-3 post player who will be relied upon to protect the paint and is a good shot blocker. He has the ability to score inside as well and his best games last year were against Franklin-Monroe and Arcanum with 14 points in each of them.

Austin Bruner is a 5-9 guard who split time last year, he is very athletic and will be asked to be the Pats lock-down defender this year.

Mason Sullenbarger is 5-10 forward and a blue-collar guy who can help control the paint and work the boards.

Mason Coby is a 5-10 forward and a high energy guy coming off the bench. He will be an impact guy on the defensive end as well as rebounding.

There are two juniors on the team in Mason Lay and Zachary Dowler.

Mason Lay is a 5-10 forward/guard and is another high energy guy coming off the bench. He is also athletic and capable of scoring both inside and out.

Zachary Dowler is a 5-9 guard and a scrappy guy who can use his quickness and athletic ability to help the team in a variety of ways.

The Patriots have a freshman starter this year who should have an immediate impact.

Layne Sarver is a 6-2 guard who has a lot of raw talent and is long and athletic. The Patriots will need him to stay aggressive and become a consistent shooter.

The Cross County Conference had a few dominate teams last year, but most of those teams have graduated a lot of talent. Look for the conference race to be a little more open this year.

“National Trail is well coached and made some big strides last year. I think they are poised to take the next step in winning,” Perry said.

“Franklin-Monroe has Ethan Conley who is a player and will be tough to guard and stop.”

“Twin Valley South has great guard play and I believe they have a lot of talent coming up this year.”

“Tri-County North has great guard play as well and will tough to guard.”

“Bethel, Coach Kopp will always have his boys prepared and as of right now the CCC championship goes through them,” Perry stated.

“The team has done well so far in our scrimmages and we are learning how to develop the chemistry between each other, and the good news is the things we need to fix are fixable,” Perry said.

“The seniors are stepping up and asserting themselves as leaders because they want to make this season the best it can be, and I expect by Friday to have positive results in our season opener,” Perry concluded.

There is a schedule change with the Patriots opening game. Originally scheduled to be played on Saturday, Nov. 30, now will be played Friday, Nov. 29 at Southeastern with the JV game beginning at 6 pm.