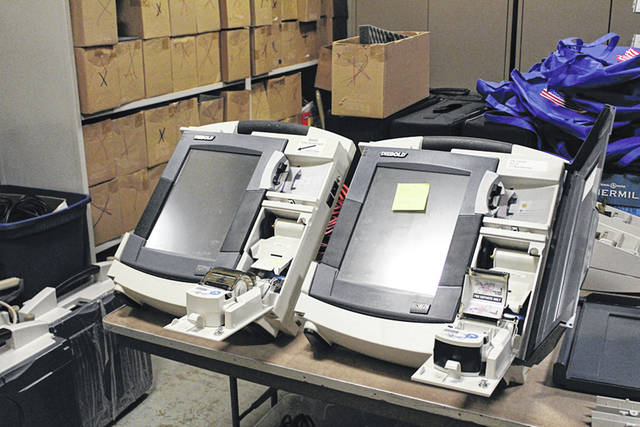 DARKE COUNTY — If all goes as planned, Darke County voters may see new voting machines in the May 2019 primary.

On Thursday, Ohio Secretary of State Jon Husted notified county boards of elections they may begin the process of acquiring new voting equipment through the Voting Equipment Acquisition Program.

A total of $104.5 million in funding will be available to purchase new equipment for counties.

“Ohio’s voters will soon say goodbye to aging voting equipment that predates the first generation iPhone,” Husted said. “Taking action now allows the voting machines to be put in place next year so poll workers can be trained and the equipment can be tested well ahead of the 2020 presidential election.”

Eligible county boards of elections will select their system, equipment and services from the approved vendor’s list. The Secretary of State’s Office has encouraged county boards to work closely with their county commissioners in choosing a voting system.

The funding will be released in phases, beginning with approximately $72 million available to counties who plan to replace their voting systems prior to the 2019 Primary Election. In addition to the $104.5 million in replacement funds, $10 million in reimbursement funding will be available to counties who have replaced their voting systems since Jan. 1, 2014.

Darke County Board of Elections Director Luke Burton said the Secretary of State’s Office informed him the county will receive $650,222.36 toward new voting equipment. However, Burton said the county’s options would be limited, and he will request new quotes from vendors.

“The board and I have had several conversations with the Darke County Commissioners about this. The county will not be able to provide funding above what the state has allocated to us. $650,000 is a lot of money, but initial quotes for a couple of the vendors were well above this,” he said.

In December 2017, Burton told The Daily Advocate the county’s current voting machine, the Diebold TSX, has been in service for 12 years. He said approximately a quarter of the county’s 240 voting machines have undergone repairs or are no longer operable, some repaired using duct tape and super glue.

Burton hopes that while the board would be able to fund new voting equipment “100 percent without county help,” there are ongoing costs that need attention, all amidst a $1 million anticipated shortfall in the 2019 county budget.

“Our paper, maintenance and license fees are going to be increasing,” he said. “The Sheriff’s Office got a lot of attention, but my budget was cut by 10 percent for 2019 as well. We already run a very lean office and are happy to do our part in regard to budget cuts. But I will most likely need to ask the commissioners for emergency appropriations by the third quarter of 2019. The commissioners understood this fact when they approved our 2019 revised budget.”

Burton said the board has not made any decisions or officially eliminated vendors from consideration. However, he said he would be surprised if a decision is made during the board’s December meeting.

“We will need to start finishing the decision-making process soon in order to implement the voting equipment in May 2019,” he said.