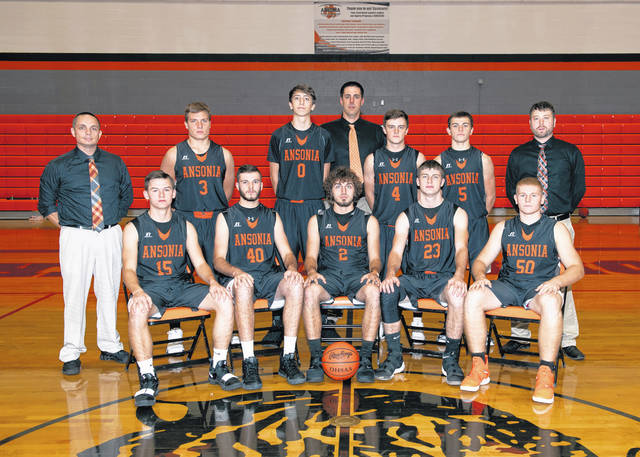 ANSONIA – Ansonia is starting its boys basketball season a week later than many of the other teams in the area.

“We open with two league games at Tri-Village and Newton,” said first-year head coach Devin Limburg. “There really is no room for error.”

The Tigers were originally set to open with Bethel last week, but because the Tigers football team played into the postseason for the second straight year, the basketball team pushed its start date back one week and moved the Bethel game to later in the season.

Though Limburg is excited to get his first head coaching season off the ground, he was more than happy to push the start of the season back a week.

“The atmosphere here was awesome with it being a home playoff game,” he continued. “It was exciting and that is good for them coming into this because those guys should want it more. They should want to make a splash this year and I think they can. We have the group to do it. They just have to have enough discipline and patience and trust in themselves.”

Limburg is carrying nine on his varsity roster and said he will also have a couple who split time between varsity and junior varsity. On the varsity roster, eight of the nine played football.

He also has five returning varsity players from last year’s 12-11 team. Four of his five seniors are returners and one junior is a returner. The roster is made up of the following players:

Hunter Muir is a 6-foot-4 senior who has been a Cross County Conference first team player the last two years. He averaged 15 points and 9 rebounds per game last year, according to Limburg. “He is our big guy and we will lean on him,” Limburg said.

Devyn Sink is a 5-11 senior who averaged 14 points per game last year.

“Those two are really good when they play together,” Limburg said.

Hunter Buckingham is a 5-9 junior and a good shooter, according to the coach.

“Those are probably the main three for us,” Limburg said. “Everybody else will contribute in their roles.”

“They all will play big roles for us this year,” Limburg said. “Matthew Farrier will be our point guard. He can score if he needs to, but mainly will drive and kick the ball. He is a good ball distributor. Ethan Fischer is the back up point guard who can shot. He is a gritty kid who will give us some solid minutes.

“Really everyone is going to play big roles for us,” he continued. “Our expectations are pretty high honesty. We’re as good as anybody in my opinion and we can be the best team in the league, it’s just a matter of us staying focused night in and night out which is tough, but I think when we play at our best we are hard to beat.”

Limburg expects the Cross County Conference to be a bit more crowded at the top this season.

“In the last couple years, it has been Bethel up here, everybody else in the middle and then a couple teams down here,” Limburg said. “This year there is like a cluster up here and not many down here. Every night is going to be a battle. The league is balanced and that is exciting. I don’t know if I have seen the league this balanced before. I think across the board every night is going to be tough and that is good. It makes us focus.”

Even though this is Limburg’s first year as the varsity coach, he has been in the program for several years at the junior high and also as a varsity assistant coach, so the familiarity between players and coach is not going to be an issue. In other words, there shouldn’t be any kind of a learning curve.

“It’s been a little different being the head coach this year, but I’ve had all these guys from 7th grade to now,” Limburg said. “I’ve either coached them or been the assistant for all of them at some point, but it is different being in charge I guess. They know how I am and I know how they are. It’s not like we are all new to each other. There is new stuff for them to learn and I’ve tweaked some things, but it is all stuff they have seen in the last six years. It’s just stuff that has been added to it.

“The big thing I am trying to hammer home is for them to play together,” he continued. “Individually, I have five guys that I think have super talent. They need to work and play together – and they have. The first week of practice was phenomenal with improving body language, improving positivity on the court, being there for their teammates and just being a good teammate in general. They have done an awesome job so far. They are getting better every day.”

As mentioned earlier, the Tigers open their season on Friday night at Tri-Village at 7:30 p.m.

“Tri-Village is always a battle,” Limburg said. “So hopefully we can get everything worked out before the season starts. We need to be ready to go.“