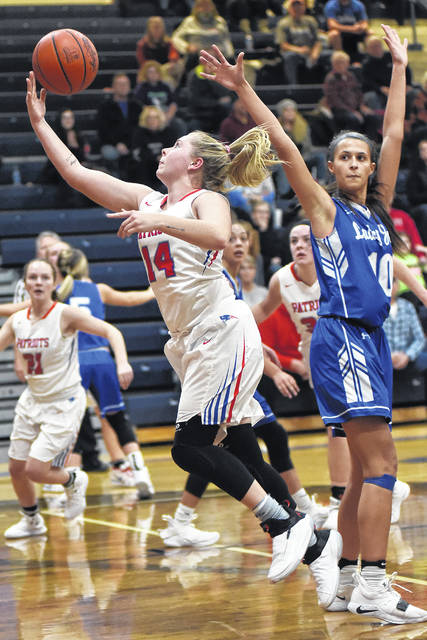 NEW MADISON – It was an early season showdown between two of the top contenders for the girls Cross County Conference basketball race between Tri-Village and Franklin-Monroe, and it wouldn’t disappoint. The outcome was in question and the game in the balance until the last second ticked off the clock with the Patriots holding on for a slim 43-40 win on Thursday.

A loss is never easy, but for the Jets it might just be another bump in the road as they fight through early season adversity, but one thing for sure there is no denying the resolve and fight of this Franklin-Monroe team.

With the Patriots holding a 42-31 lead with 3:05 to play it might have been easy for the short-handed Jets to pack it in, but true to form they fought their way back into the game closing the gap to 42-40 with 1:02 to play.

A couple of free throws by Chloe McGlinch, a fielder from Stella Shellabarger and then a fielder and a big triple from Belle Cable sparked the Jets in the comeback.

The Patriots missed a crucial front end of a 1-and-1 and went just 3 of 6 from the free throw line late, setting up an opportunity for the Jets to tie the game, but a great defensive play by the home team knocked the ball loose and out of bounds never allowing the Jets to get the game tying shot up and falling short despite a gallant effort.

“They are a great team and very well coached and we knew when we made that run they were going to hit us back in the mouth, and they did. There were multiple times in the game where we had 7, 8 point leads and they punched right back, that’s just a credit to a good team and what you expect from Franklin-Monroe,” varsity assistant and acting coach Laden Delawder said.

“My heart breaks for these girls. They played their butts off tonight and they wanted it, but we came up short in the end. I told them in the locker room I am so extremely proud of their effort, especially on the defensive end and if a couple more shots fall it’s a different ball game,” FM coach Abbey Moore stated.

Early on in the game it was apparent that FM was focused on slowing down or denying Emma Printz and Lissa Siler catches and open looks while also furiously defending the interior.

The star of the game for the Patriots would have to be the least likely of players, Andi Bietry.

When you take something away you have to give something up, and Bietry stepped up knocking down four 3-pointers in the game, including 8 points in the opening quarter. Despite that the home team still trailed 14-13 at the end of the quarter.

The Jets were hot from behind the arch as well with Cable and Corina Conley both connecting on 2 triples each to stake the first period lead.

Shellabarger hit a triple to start the second frame to give Franklin-Monroe its largest lead of the game 17-12. But back came the Patriots with another trey by Bietry and a mid-range jumper from Madison Foreman to tie the game at 17-17.

Siler regained the lead for TV with a corner trey 20-17 and then a few minutes later 6-foot-2 freshman Meghan Downing was good from the top of the key for three and the Pats seemed to be back in control up 23-17.

It was a good old fashioned slug fest and the Jets responded with Conley taking matters into her hands as the junior forward attacked the rim on multiple occasions connecting for two inside and going 5 for 6 from the charity stripe to keep the Jets close trailing at the break 28-25.

The defensive intensity was elevated in the second half and points were hard to come by.

Bietry’s triple got the scoring started after the half and the Patriots pulled ahead on a couple of inside buckets from Meghan Downing to go up 36-27 prompting an FM timeout.

Buckets from Conley, Cable and Chloe Peters in the third quarter helped keep the Jets in striking distance trailing 36-31. The Jets fought hard in the fourth quarter coming up short, but not before earning some respect along the way.

“Our season is all about earning respect. I know what these girls are capable of doing and nobody has quite seen it yet, but I think they proved it tonight, Hopefully we took that step toward earning that respect and we’re one step closer to finishing big games,” Moore said.

Part of that respect comes from the intensity and defensive effort the Jets put forth.

“Defensively my two bigs on the inside – Conley and Peters – really stepped up big guarding the two Downing girls and they battled their tails off. This Tri-Village team is an awesome ball team. They’re big and tough, but I am so proud of those two for the way they battled and took away a lot of what they wanted to do in the paint,” praised Moore.

“I had a couple of girls who came in off the bench and their role was to deny the Printz girl the ball and deny shooters and they did it,” Moore added.

With the FM defense taking so much away from the potent Tri-Village offense, it was time for the least likely player to shine, and shine Andi Bietry did.

“Andi is a kid that a lot of teams scout and say she can’t shoot it, but tonight she proved she can. FM really gets after you by playing great disciplined defense and to combat that you need a good point guard who settles you in your offense and Andi is one of most valuable players and did a great job of settling us into it tonight,” Delawder said.

Cable, who hit some timely shots and was key in several of the Jets runs to stay in the game, led her team with 15 points. Conley, who was big on the boards and had several big blocks on defense, added 14 points.

“It’s been the story of our year so far battling through adversity. Obviously if you look at our bench we don’t have a lot of numbers and it’s been adversity all year, so these girls are getting used to it when they face it in a game and know we don’t fold, and we just continue to battle, and we showed that again tonight,” concluded Moore.

Tri-Village was led by Andi Bietry with 14 points and Meghan Downing added 10 in the win.

First year varsity assistant coach Laden Delawder probably never imagined a few weeks ago that he would be tasked to lead the Patriots program in the first two Cross County Conference games of the year and especially against a team like Franklin-Monroe.

“You know I told the kids for myself this is never how you imagine your first two varsity games, but I all ask of them was to play as hard as they could, leave it all on the floor and play for each other and that’s what we got tonight,” Delawder stated.

“Throughout this whole situation over the last two weeks with the coach being gone nothing really has changed. We are still Tri-Village and we’re going to do what we do, take care of the basketball, rebound the heck out of it, and play incredibly hard,” Delawder concluded. 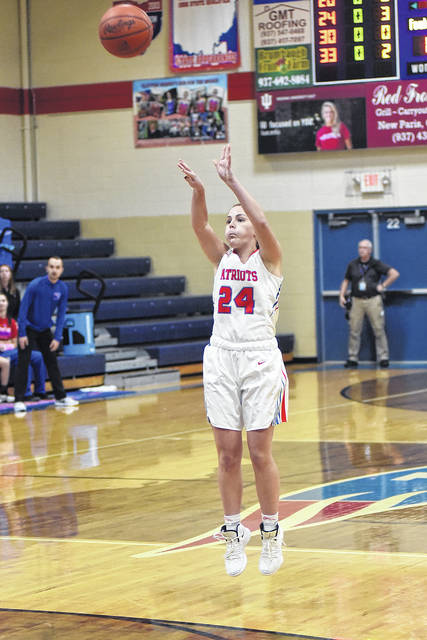 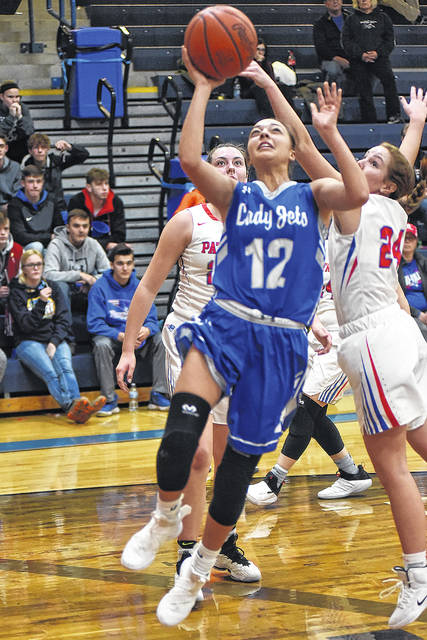 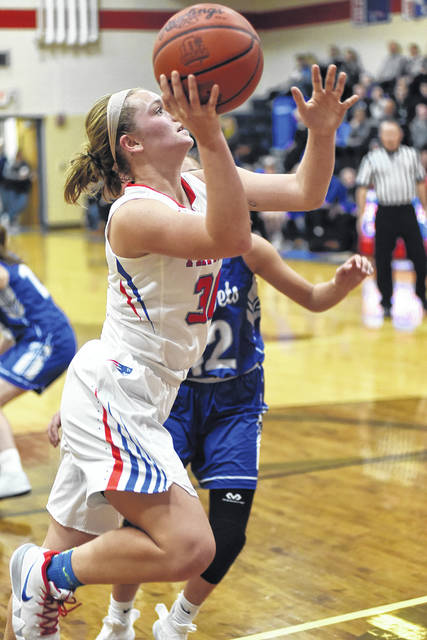 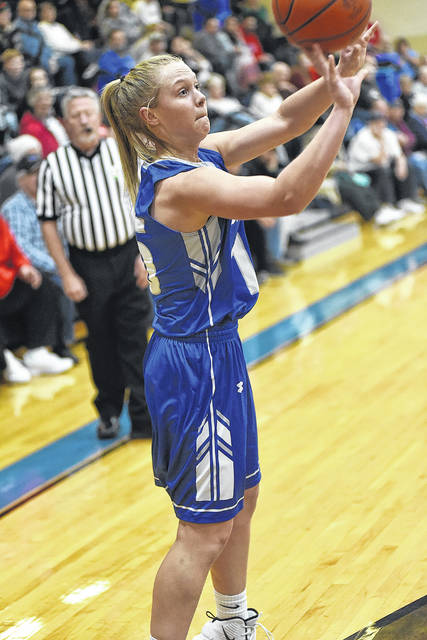 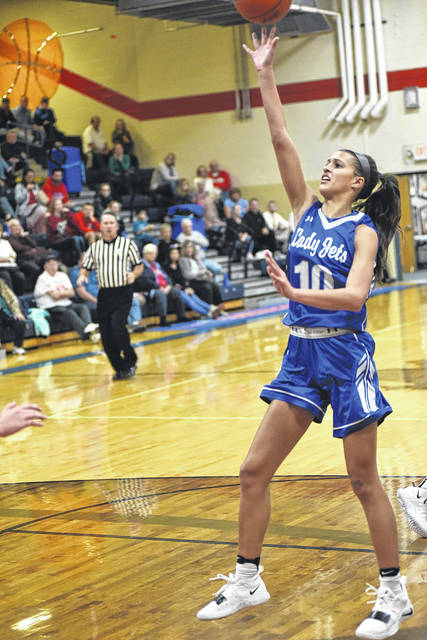 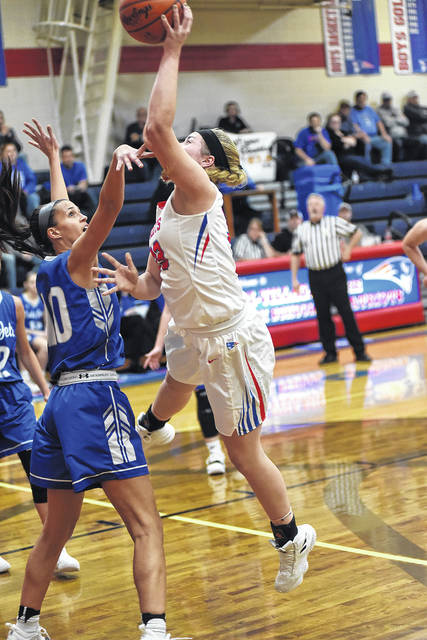 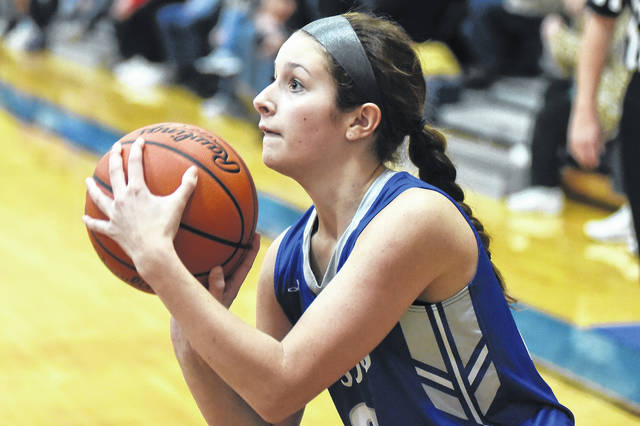 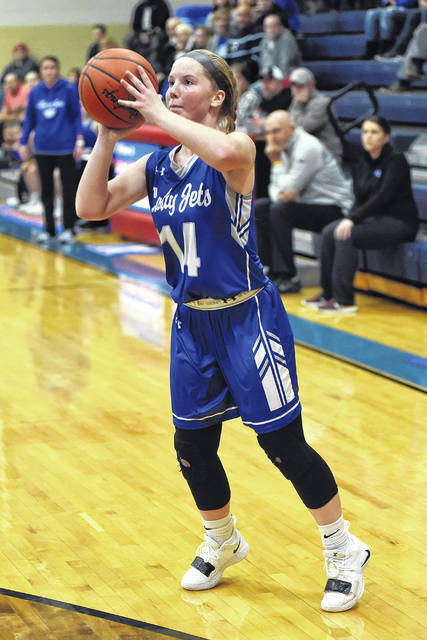 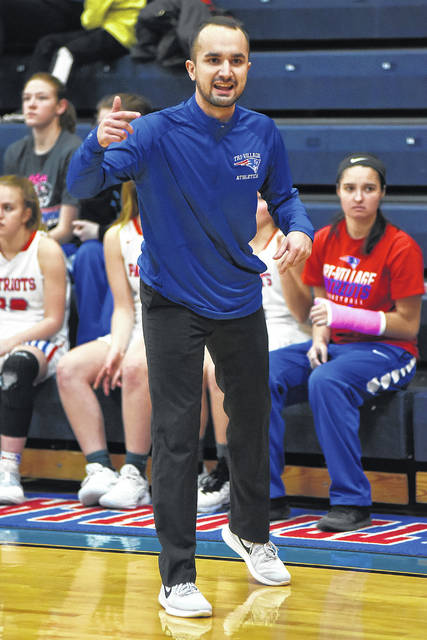