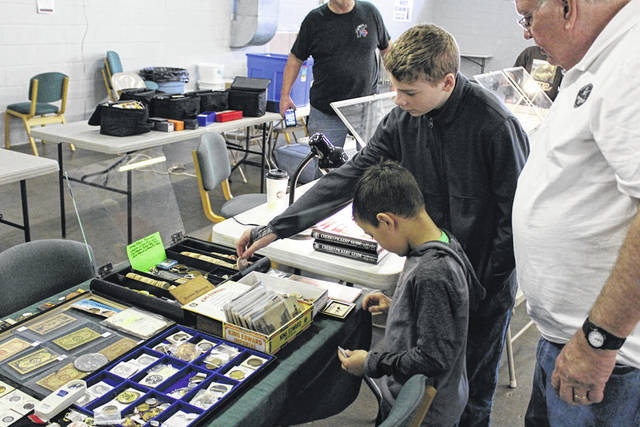 GREENVILLE — Hobbyists from Darke County and surrounding areas gathered to examine, buy and sell coins and other collectibles as the Darke County Coin Club held its 53rd annual coin show Sunday at PAWS Bingo in Greenville.

Darke County Coin Club President John Magoteaux said the coins drawing the most interest from collectors at this year’s show are the National Parks quarters and the U.S. Mint’s special West Point Mint Lincoln cents. As well, many seek a local connection to add to their collection.

“A lot of people are collecting memorabilia from Darke County,” he said, and added there were vendors selling paper money, stamps, sports cards and postcards. “Any kind of collectible, you can find it here or find someone that knows something about it.”

This year, the club sold a special run of wood tokens commemorating the club’s 53rd show, with each token numbered from 1 to 500.

Bob Livesay, a longtime member of the club, was on hand to sell coins, stamps and other collectibles. Like many “numismatists,” he said his interest in collecting started early.

“I started collecting when I was a kid and kept at it,” he said.

Livesay said he started selling because he had “too much of it.”

“You collect, you have too much, so it’s like thinning out extra stuff, and lo and behold, people come up and ask if they can sell and you have more stuff. It just kind of snowballs,” he explained.

“They had some value at one time, and hopefully they still have some value [to someone],” he said.

The Darke County Coin Club meets at 7 p.m. the third Monday of each month at Spirit Medical Transport, 5484 State Route 49 South, Greenville. Prospective members are encouraged to attend. Club meetings include a monthly coin auction. Junior memberships for those younger than 18 years of age are $2 per year while adult memberships are $10 annually.