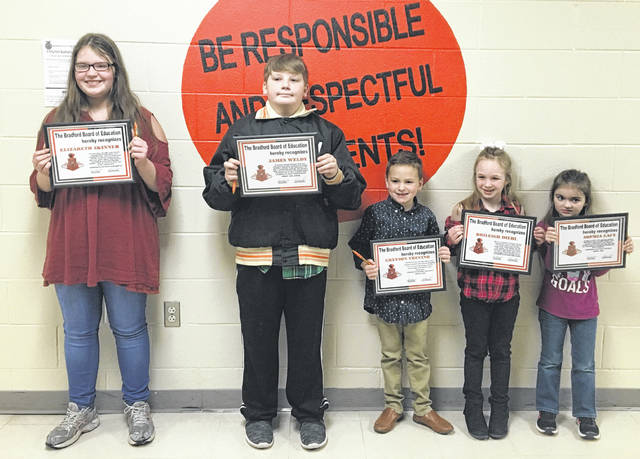 BRADFORD — The Bradford Board of Education approved a new contract with the Bradford Education Association during its meeting on Monday evening, approving annual pay increases for district employees in the association.

The board approved the new contract by a vote of 4-0 after first going into executive session for the purpose of reviewing those negotiations with the district employees. Board member Maria Brewer was absent.

The new, three-year contract includes a pay increase of 2.5 percent for the first year and pay increases of 3 percent for each of the following years. Bradford Superintendent Joe Hurst also said a number of teachers who were affected by a pay freeze during the 2012-13 school year were brought up to their correct pay step.

The contract also slightly adjusted the school day to start and finish 10 minutes later, changing the school day that is currently set at 8 a.m. to 3 p.m. to a schedule set from 8:10 a.m. to 3:10 p.m. Hurst said this will help out with the bus schedules, particularly with their students who attend the Upper Valley Career Center. This is expected to take effect during the next school year.

Also during its meeting, the board honored five students during the student spotlight.

“During her free time at school and at home, you will hear her playing school,” Fry said. “You will see her practicing sight words and letters with other students.”

Fry also commended Diehl for being a model student who is respectful, responsible and willing to help others.

“Greyson has many friends and is very helpful to his teachers and classmates,” Ridout said in a statement read by Fry. “He shows integrity and is a very honest person. He brings a lot of knowledge and ideas to our classroom.”

“Sophia has always been a quiet leader in our classroom,” Bensman said. She added later on, “I hope this competitiveness and her strive to be the best that she can be continues throughout her school years. I am proud to have Sophia Lacy in my classroom. She is a wonderful example of what Bradford’s best students look like.”

Skinner was named as Bradford’s Junior High Student of the Month.

“During her first semester of junior high, Elizabeth earned honor roll both quarters. She earned a 4.0 during the second quarter, and she will most likely accomplish that same feat during the third and fourth quarters,” said Triplett, reading the nominating statement from language arts teacher Laura Sneed.

Skinner also was commended for being a hard worker, going “above and beyond this year with earned Accelerated Reader points” and being a “terrific role model.”

Triplett then recognized Weldy, who was nominated by English and math teacher Angie Szary and intervention specialist Crystal Yingst, as Bradford’s Middle School Student of the Month.

“James moved here from Alaska and was previously home schooled. He has adjusted well and continues to make positive strides in his education and social adjustments,” said Triplett, reading the nominating statement for Weldy. “James has a wonderful attitude and personality.”

Weldy also was recognized for working hard and having a “great sense of humor.”

Following that, Elementary Principal Michelle Lavey recognized Bensman during the staff spotlight. Bensman is the teacher of the district’s beginningarten program, a class for young kindergartners.

“She took the challenge of the class and made sure to do some research to get students to reach their fullest potential,” Lavey said.

She added that Bensman “has taken students that didn’t talk and cried at kindergarten screening, and some are now reading, writing and carrying on conversations.” Lavey also commended Bensman for trying to make sure “to do what is best for each individual student.”

“She is helping our students to be advanced instead of struggling, and she is a joy to watch in action,” Lavey said.

Later during their meeting, the board did the following:

• Accepted the amounts and rates as determined by the Miami County Budget Commission.

• Accepted a donation from the Bradford Railroad Museum of three cross bucks, a sign and additional memorabilia.

• Accepted a donation of a tape machine for the weight room from the efforts of Scott Helman, Greg Hale and Production Pain Finishers, Inc., valued at $575.

• Accepted a donation for scholarships from Production Paint Finishers, Inc., in the amount of $8,000.

• Accepted a donation for scholarships from the Covington Eagles in the amount of $1,000.