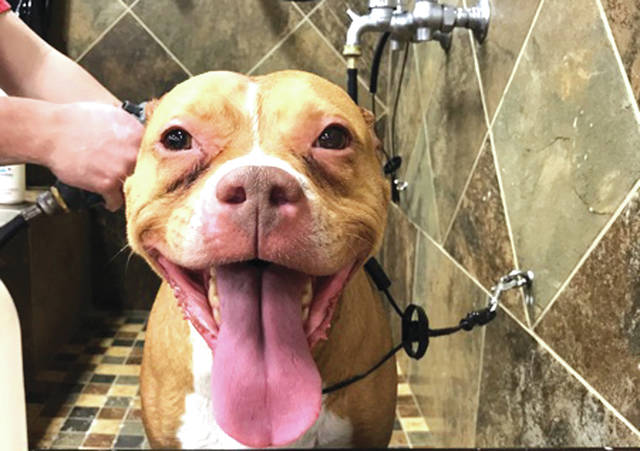 GREENVILLE — A couple recently was reunited with a dog they thought they’d lost forever due to Facebook and the efforts of a local animal rescue facility.

The couple, Jason Hunt and Hillary Frech, live outside New Madison. Their 6-year-old red-nose pitbull terrier, Kiara, had run off once before, prompting a man who worked nearby to threaten to kill the animal if it strayed back onto his property. When Kiara vanished again in September of last year, they feared that was just what had happened.

“After a few months, they basically thought she was gone for good,” Carla Hill-Clark, owner of Bark Animal Rescue in Greenville, told The Daily Advocate.

In February, the couple saw a post on the Darke County Animal Shelter’s Facebook page featuring several pitbulls, one of which they were pretty sure was Kiara.

“I got a call from Hillary, and she said they won’t adopt it to us because it’s a pit,” Hill-Clark said.

Local laws prevent the county animal shelter from adopting out pits, according to Hill-Clark, stating that they must be rescued by a private facility first — in particular, a nonprofit organization holding 501(c)3 status. Until recently, in fact, pictures of the dogs were not even allowed to be posted on the county shelter’s website or on social media.

These laws exist to protect the county against liability, because pitbulls are widely thought to be more dangerous than other breeds of dogs — a reputation Hill-Clark said they’ve done little to earn.

“I mean, a chihuahua can attack you,” Hill-Clark said. “I’ve been bitten by more little dogs than I have by pits.”

Fortunately Hill-Clark was able to reunite the dog with her owners and even was present in order to witness the reunion.

“She just went crazy,” Hill-Clark said, describing Kiara’s enthusiastic response to seeing her owners for the first time in months. “They opened the car door, and she just flew right in.”

Hill-Clark started Bark Animal Rescue in 2014, having worked for the humane society for four years previously. Though she shelters a variety of animals, she has a special fondness for pitbulls. She said recent changes in management at the county animal shelter have led to changes in how the animals are treated.

“It’s been a big breakthrough,” Hill-Clark said. “I’ve been working with the shelter for years, and it’s been hard getting the pits out of there.”

She also stressed the importance of online outlets. If an image of the New Madison couple’s dog hadn’t been posted on Facebook, after all, they might never have found her.

“She might’ve been euthanized, so luckily I was able to go out there and rescue her,” Hill-Clark said. “Social media is a big thing that helps in finding dogs.”

Hill-Clark advised those who have lost a pet to post images on social media, as well as to check in regularly with the Darke County Animal Shelter and Humane Society.