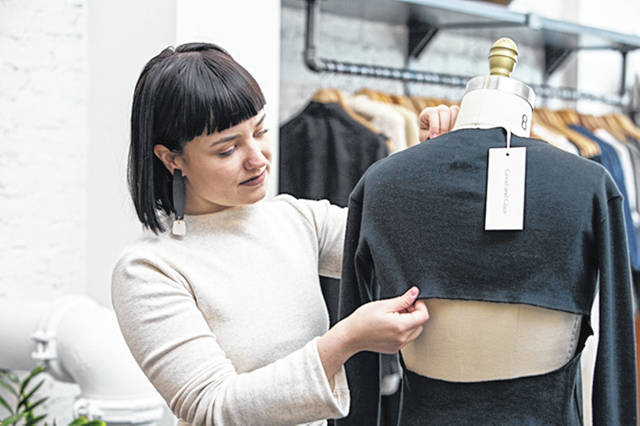 Clark, a 2009 GHS graduate and daughter of Terry and Julie Clark of Greenville, resides in Cincinnati where she creates her womenswear line, Grind and Glaze.

Clark, 27, said she learned of Project Runway’s call for designers through an email. After responding, she was invited to attend a casting call in Chicago.

“A little while later I received the news that I was a contestant. I was very excited,” Clark said during an interview with AIM Media Midwest this week.

Clark’s adventure included getting to know the other 16 designers competing this season as well as meeting the judges and mentors, with supermodel Karlie Kloss as host and fashion designer Christian Siriano as the mentor. Judges include ELLE Editor Nina Garcia, designer Brandon Maxwell and journalist and former Teen Vogue editor Elaine Welteroth.

Clark’s interest in fashion began as a child growing up at Darke County’s Bear’s Mill, where she was influenced by her parents’ creativity – her father was the miller and her mother a ceramicist. Clark earned a degree from DAAP, the College of Design, Architecture, Art and Planning at the University of Cincinnati and today works designing her womenswear line and is the sales and marketing manager for Idlewild Woman, a boutique started by her mother and a cousin, Jessica Murray.

Project Runway viewers will watch as Clark and the other contestants accept a variety of challenges to complete during this season, including a special Elton John challenge inspired by the upcoming movie Rocketman.

Clark is hosting a public viewing party prior to tonight’s season opener, hosted by 21C Museum Hotel, 609 Walnut St., Cincinnati, with cocktails at 6:30 p.m. and a fashion show at 7:15 p.m. featuring Clark’s Grind and Glaze collection as well as Philippe Haas Bespoke Tailoring.

Guests will be able to view the show’s premiere, which will begin at 8 p.m. on the Bravo network.

“There are people from Greenville who are coming to the watch party. The support from Greenville and Cincinnati has been unbelievable and surreal,” Clark said. “I’ve been so shocked and excited that everyone’s been so excited for me.”

Clark said she’s heard from people who have watched Project Runway for years and are now thrilled to know someone who will be competing.

“People who haven’t seen the show also are excited,” Clark said, explaining how her father had started watching previous episodes to “catch up” on what the show was all about. “My 97-year-old grandpa is going to watch it, too. It’s really fun to have all the support from everyone.”

Clark said she’s hoping to have “some sort of event and fundraiser” at the Mill in the future. “My line is inspired by my being raised at the Mill.”