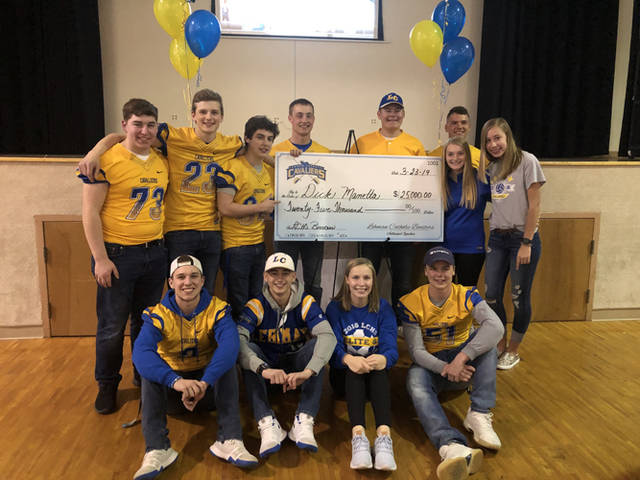 The votes for best, hottest, meatiest, tastiest and most original wings were tallied and announced at the end of the evening. Each participating restaurant will receive a plaque commemorating their support of the annual Wing Fling. The winners were:

New to the Wing Fling this year, the Athletic Boosters in partnership with Buckeye Ford in Sidney raffled off a new Ford Mustang GT valued at more than $40,000. The reverse raffle also included two cash prizes of $2,500 and $1,000. Prior to the event, more than 350 raffle tickets were sold. The winners were:

Grand prize winner Dick Manetta chose the cash option of $25,000 and gifted his winnings (minus taxes) back to the Lehman Catholic Athletic Boosters. Manetta resides in Naples, Florida. He is the grandfather to 11, including two Lehman Catholic High School students and two who are students at St. Patrick Catholic School.

“Recognizing the importance of the education and values that Catholic schools like Lehman Catholic provide to our young people, my wife and I were pleased that we had the opportunity to gift our good fortune to the school,” Manetta said.

Lehman Catholic High School offers 18 competitive varsity sports programs that rely on the support of the booster organization to avoid pay-to-play fees so that all students have the opportunity to participate in multiple sports. Fundraisers, such as the Wing Fling and Car Raffle, help to defray the cost.