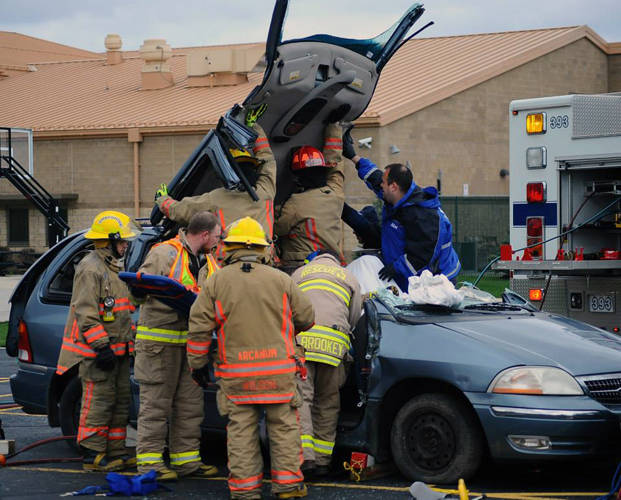 For more than 20 years, CareFlight has offered Drive Smart, a nationally recognized mock crash program that gives high school students a real-life look at the consequences of poor choices before getting behind the wheel of a car.

The mock crash is narrated throughout, and all events occur in real-time, with emergency radio traffic and phone calls made audible for the entire audience.

The scenario begins immediately after the crash occurs with bystanders calling 911 and progresses with the dispatch and arrival of police, fire and EMS, the extrication of victims from the vehicles, the dispatch and arrival of the CareFlight helicopter, the transport of the injured crash victims, the arrest of the intoxicated driver and finally the removal of the deceased victim by the coroner with placement into a hearse.

At the conclusion of the scenario, a parent who has lost a child in a similar situation speaks to the audience, giving an emotional and sobering testimony to the realities of impaired and risky driving.

The objectives of the Drive Smart are geared toward raising teen awareness of the dangers and consequences of bad decision-making, specifically drinking and driving, driving/riding without a seatbelt, texting and driving.

The following are confirmed dates and locations for the Drive Smart program: