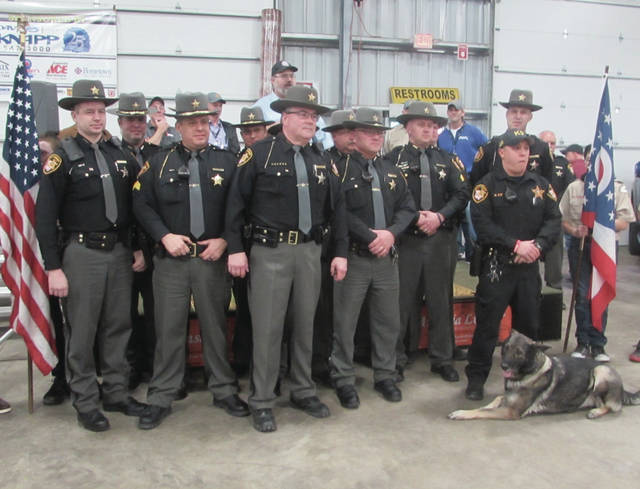 GREENVILLE — The Darke County Sheriff’s Patrol held its 57th annual Home & Sports Expo this past weekend in the Dairy and Beef Pavilion on the north side of the Darke County Fairgrounds.

Aaron Kruckeberg introduced fellow committee members Joe Wintrow, Jerry Bunch, Dick Rhoades and Don and Diane Delaplane, and members of the Darke County Sheriff’s Patrol were asked to assemble in front of the stage for pictures and applause.

“The Sheriff’s Patrol covers events we don’t have the manpower to cover,” Spencer said. “The fair, Eldora Speedway. I can’t say enough about how much they make our lives at the Sheriff’s Department easier.”

“Spouses are the unsung heroes,” Spencer said. “They do a lot of things behind the scenes, things they don’t often get credit for.”

Spencer stressed that the Sheriff’s Patrol is paid for entirely by fundraisers rather than tax dollars, which is what makes the yearly expo so important.

“They don’t operate on county money — on your money,” Spencer said. “So I encourage you to support all the vendors who have come out to support us.”

Spencer said the expo has experienced a resurgence under the leadership of the current committee.

“A few years ago this event was a dying thing,” he said. “We were wondering if it had too many years left.”

“They’ve really taken it to the next level,” Aultman said of the current committee.

“They’re the ones who give us the opportunity to transform this 40,000 square foot space into the show you see today,” Sanning said.

The show continued from 9 a.m. to 9 p.m. Saturday and 10 a.m. to 4 p.m. Sunday with more than 100 vendors located inside and outside the pavilion. Recreational vehicles and camping and fishing equipment also were on display, along with landscaping and home improvement demonstrations.