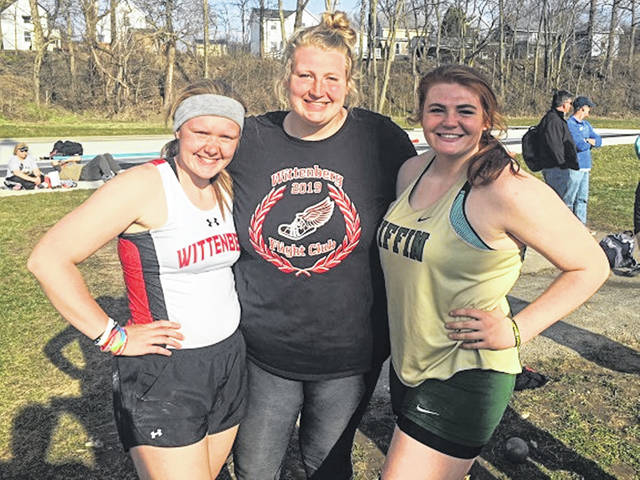 Nicole Berry and Hannah Eley, graduates of Franklin Monroe High School and Kathryn Combs, a graduate of Tri-Village High School recently met on the Campus of Heidelberg University to compete in the well know Tiffelberg Invitational.

Both Combs and Eley have qualified to compete in the All-Ohio Meets for the 2019 indoor and outdoor track and field seasons.

“I didn’t realize how much I would improve when I got here,” Combs said. “I threw a whole foot more in the shot put and six more feet in discus. I started in weight throw and threw in the high 10s (meters). I’m throwing 32m in hammer right now. It’s a work in progress.”

“In high school I didn’t have as many opportunities for one-on-one coaching constantly,” the difference between high school and college Combs noted. “The coach is always there.”

Eley, now in her second year competing at the college level owns a 51’1” Wittenberg school record in the weight throw and has a best of 144’5” in hammer, 112’2” in the discus. Although no longer able to compete in the shot put, the former Jet had a best of 34’6.25.

“College is stressful,” said Eley. “I really enjoy the teammates. We have some pretty good competition in our division.”

“I was surprised at how well I did in the weight throw,” noted Eley, “especially with my back the way it has been.”

“I need to sit more,” Eley said of where she can improve. “I stand too much when I throw. Discus is coming along; it was a little rocky to start the year.

Berry, a High School All-American, 2nd Team NCAA All-American and now a redshirt freshman has been as high as No. 2 in the Nation for DII schools with a 51’3.75 throw in the shot put, a Tiffin University indoor record and she also has the Tiffin outdoor shot put record as well with a throw of 51’.75”. Berry has also thrown 148’5” in the hammer throw, 150’3” in discus and 48’4.25” in the weight throw.

“So far I’ve been able to avoid major injuries,” Berry said of her first official year of throwing at the college level. “I’m happy to be doing what I love with people I enjoy being around.”

“It’s awesome – it helps me realize that I belong here,” Berry said of her school records. “I didn’t know how I would compete with other NCAA Division II athletes when I got here, but now I have the confidence to go head-to-head with the competition at this level.”

The three Darke County natives each agree, meeting former teammates and competitors at the college level is pretty special.

“It’s a fun time and I’m glad we are all excelling at what we do and that we are able to talk each other,” Eley said.

“The girls that I threw shot put with in high school have helped me grow up a lot and handle harder competition a little easier than normal,” stated Berry. “It makes me happy to see them again and see how well they’ve done with their new school.”

“Some of the college coaches reached out to us and we never thought that we could do that coming from a small town,” Eley concluded. “We also had coaches back home that pushed us.”