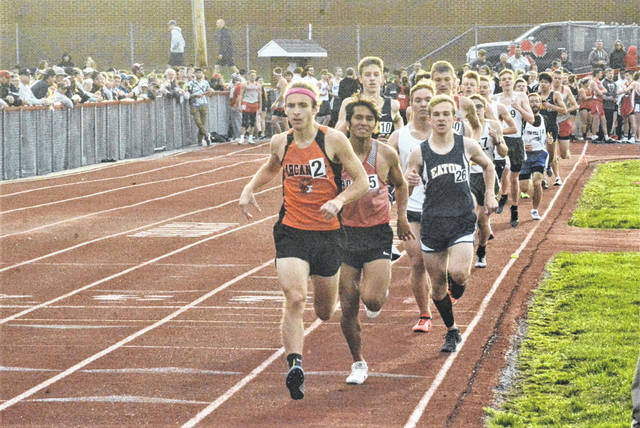 Twin Valley South hosted the Durkle Invitational on Friday and was well attended by fans, Athletic Director Tony Augspurger stated; “if it wasn’t a record breaking crowd, then it was close to it.” Eaton won the girls side with 105.5 points. Host Twin Valley South won the boys side with a score of 91.5 points.

There were some outstanding individual performances where athletes brought home the hardware – winning first place medals. Three athletes were “triple threats” – each winning in three events which considering the number of teams competing in the invitational was quite the feat. Selene Weaver from Franklin Monroe was first in the pole vault, long jump and 200m dash. Austin Bruner from Tri-Village swept the sprint events taking first in the 100m, 200m, and 400m dashes. Finally, Tanner Delk from Arcanum swept the distance events, showing great endurance. He was first in the 800m, 1600m and 3200m runs.

The Tri-Village coaches were asked for comment – from the boy’s side: “It’s been a wonderful meet, everything looks good. At this point in the season we just want the boys to get better – and the ones that are supposed to win, we want them to win. We aren’t worried about times too much now – we are focused on the big meets at the end of the year. Austin Bruner did a good job today winning the 100, 200, and 400 meter events. And we had a baseball player come in, Layne Sarver, and place third in the high jump. If he gets more time and more jumps, we think that he can be where he needs by the end of the season. At the end of day – at each meet, we just want to be better and we are doing that.”

The girls coach had this to say, “The meet has been good for us. We’ve been working hard this week. Our long jumpers Lissa Siler and Maria Petry placed second and third. Both of them cleared 15 feet, and they both competed in the high jump. Petry took third and Siler was sixth. I tell them all that these meets are to get you ready for the end of the season, that’s when it really counts.”