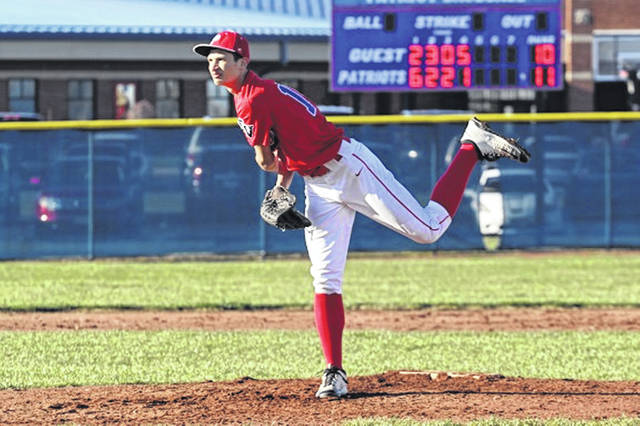 NEW MADISON – The Tri-Village Patriots won a slugfest over the visiting Ansonia Tigers in a Monday night non-conference game by a 19-13 score.

“I’m glad that we won,” said Tri-Village coach Jim Maples. “Ultimately that’s what you want to do is win the ballgame, but I think we’re better than what we’ve shown the last couple days. I hope we get back to playing what we were playing earlier in the year.”

Ansonia took an early 2-0 lead in the top of the first inning only to have the Patriots put six runs on the board in its half of the first to lead 6-2 after an inning of play.

“It was a big back and forth game, mistakes on both sides in the field,” said Ansonia coach Zach Evers. “Both teams were taking advantage of it.”

Ansonia battle back plating five runs in the top of the fourth to even the score at 10-10 with Tri-Village scoring a run in their half to lead 11-10 after four complete.

“To see us come out and put the bat on the ball and put up a lot of runs, I’m pretty happy about it,” Evers stated. “Defensively we have to make those plays. You can’t give the extra outs and expect you are going to come out with a win.”

Ansonia grabbed and 13-11 lead in the top of the fifth, a lead that would not hold up with the Patriots plating four runs in the bottom of the inning to lead 15-13.

“We have a very young and inexperienced team,” Maples said. “Last week we had Miami East, Trail, and Tri-County North – three of the strongest teams in the league. We lost all of them but we were competitive with the young bunch and up to that point of the season I was really happy with the way that we were playing. We played Randolph Southern Saturday in a double header and we split but did not play good baseball and we did not play good baseball today either.”

The Tigers would not score again on the night while Tri-Village was adding four runs to the board in the bottom of the sixth to seal the six run win.

“We put a young kid on the mound tonight, a freshman,” Ansonia Coach Evers said of Colton Young.

“Wasn’t sure – just told him we needed strikes and he performed very well. At the plate we had a lot of good things going. We had some guys that were struggling at the plate that were able to lay some bunts down, so that’s a step in the right direction for us.”

Ansonia accounted for 13 hits and five errors while Tri-Village was banging out 19 hits and committing eight errors.

“We made some very bonehead plays out there, guys not running with two outs, guys not paying attention knowing what they need to do in certain situations,” Coach Maples said following the game. “From a coaching standpoint it was a very frustrating game but I am glad that we won.”

Tri-Village improves to 6-6 overall and remains at 3-3 in CCC play.