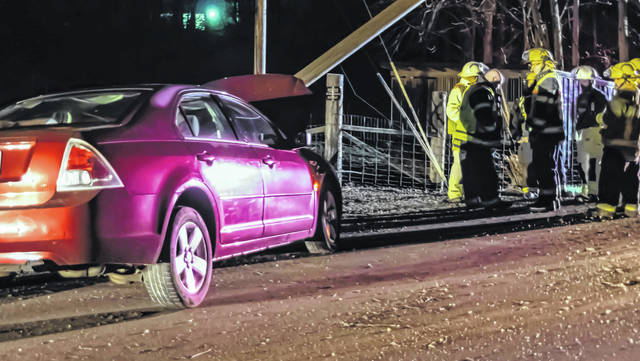 At approximately 11:05 p.m., emergency personnel from Pitsburg Fire Department and Arcanum Rescue along with deputies from the Darke County Sheriff’s Department were dispatched to the 9000 block of Pitsburg-Laura Road on the report of a single-vehicle injury accident. According to the Darke County Sheriff’s Department, preliminary investigations into the accident have revealed that a red 2006 Ford Fusion was traveling eastbound on Pitsburg-Laura Road when the female teenage driver lost control, going left of center, overcorrecting and causing the vehicle to continue off the right side of the roadway. The Ford Fusion then made contact with a utility pole, causing the pole to break off just above the ground before eventually coming to rest in the eastbound lane of the road.

The teenage driver was treated on the scene for minor injuries by Arcanum Rescue prior to being transported to Wayne Healthcare for further evaluation, at the request of her parents.