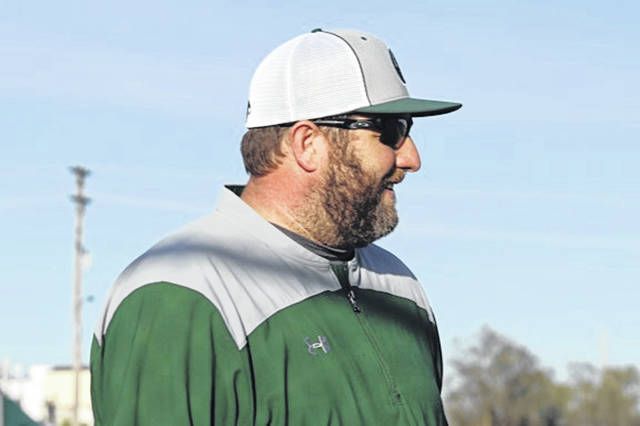 GREENVILLE – The Greenville varsity baseball team use a seven run fourth inning to run rule the Sidney Yellow Jackets 15-5 and battled back in the nightcap to defeat Sidney 10-7 in extra innings after trailing 7-0 after five innings of play to win five of their last six games.

“We weren’t expecting to play a double header tonight,” said Greenville coach Eric Blumenstock. “Got a last minute phone call and wanted to get both of them in because of the incoming weather tomorrow. You never know what is going to happen this time of year.”

The Green Wave cranked out seven fourth inning singles, a double and earned two walks with the big hits a two run double off the bat of senior Landon Eldridge and two run single from freshman Warren Hartzell giving the Wave a 9-2 lead after four.

Sidney added three runs in the top of the fifth for a 9-5 Wave lead but it was Greenville plating two runs in the fifth and four in the bottom of the sixth with a walk-off Sells RBI single to right scoring Tyler Beyke bringing game one to an early close.

“First game Warren Hartzell threw a pretty good ballgame,” noted Blumenstock. “He ended up getting a pretty nice lead on them and run rule then in the first one.”

Trailing 7-0 in the nightcap, Greenville scored four runs in the seventh getting RBI singles of the bats of Terry Miller, Landon Eldridge, a Sidney error scoring Reed Hanes and a bases loaded RBI walk to Warren Hartzell.

Greenville plated three runs in the seventh sending the game to extra innings by way of a Hanes one out single, a Miller walk, a two run double to center off the bat of Eldridge and a two out RBI single to left scoring Eldridge with the tying run.

Playing as the visitors in game No. 2, Greenville took advantage of a Beyke walk, a Hartzell single to center, a dropped third strike to score a Wave run and a Miller two out two run single to left scoring Grote and courtesy runner Ethan Flannery for a 10-7 Greenville lead.

With Minnich on the mound and solid defensive play, Greenville set the Jackets down in order in the seventh and eighth innings to earn the GWOC Monday night sweep over Sydney.

Minnich was the pitcher of record for Greenville allowing two hits and no runs over four innings, striking out five and walking none in relief.

“Grant Minnich threw the last three innings of the game,” Blumenstock said. “Shut them down. Did an excellent job. He struck out five of the nine batters he faced – it was a great job.”

“We played a double header and turned out pretty good,” Blumenstock stated. “Got two wins and it’s always nice to pick up a couple more GWOC North wins.”

With the wins, Greenville improves to 9-10 overall and 7-6 in GWOC play.