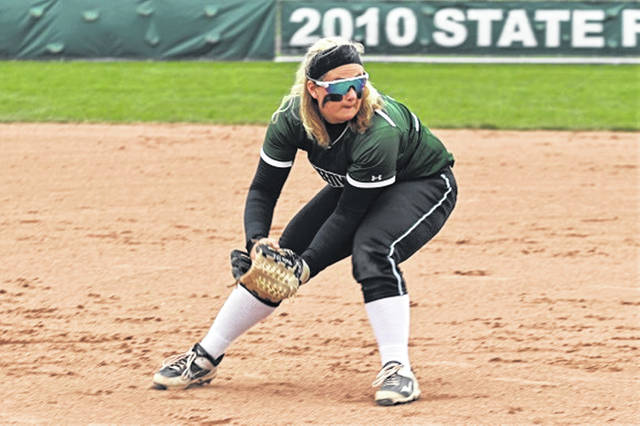 GREENVILLE – The Lady Wave defeated the Sidney Lady Yellow Jackets in a Monday night double header 3-0 and 8-4 at Greenville’s Lady Wave Stadium to complete a sweep of the GWOC American North and win the conference title outright with a perfect 14-0 record.

“It’s awesome – the last one,” Greenville coach Jerrod Newland said of the last GWOC title with the program moving to the MVL next season. “I was a GWOC person, that’s why I came to Greenville. Last one ever.”

“Very proud of the kids,” continued Newland. “It’s 11 in a row including the independent break. The only one we ever lost was my first year at Northmont and I will never forget it. We lost in 13 innings. Proud of the kids, proud of the program. Big opportunity to get our 20th win coming up.”

Greenville finishes the GWOC season as the only team from the 20 team conference to go undefeated in 2019 league play.

The Lady Wave grabbed a first game 1-0 lead in the bottom of the second inning with Nyesha Wright taking a 4-0 count walk and moved to second with a Chloe Sowry sacrifice bunt down the third base line.

Baylee Petry knocked a single to left putting runners on the corners with Morgan Gilbert coming to the plate to score Wright with the game’s first score by way of a fielder’s choice to short.

Greenville took advantage of a Lady Jackets error to plate the second run of the game with Susi Blocher reaching second on a misplayed fly ball and scoring on a two out double to center off the bat of Natea Davidson the give the Lady Wave a 2-0 lead with three innings in the book.

Lady Wave sophomore Kennedy Fashner kept the visitors off the board through 4.2 innings with Coach Newland calling on sophomore Grace Shaffer to take the mound with runners on first and second with two outs in the top of the fifth. Shaffer coaxed a first pitch fly ball to right with the speedy Lani Shilt making a running catch for the third out of the inning and keep the shutout intact.

Sowry reached first to open the bottom of the sixth for the Lady Wave with Sidney’s third error of the day, a Gilbert walk and a Shilt single to left scored Greenville’s third and final run of the day and a Greenville win.

Natea Davidson led the Lady Wave at the plate going 1-3 with a double and a RBI. Morgan Gilbert was 1-3 with a walk and a RBI and Lani Shilt went 1-3 with a RBI.

Baylee Petry was 1-3 with a run, Susie Blocher 1-4 and a run scored, Haleigh Mayo-Behnken accounted for a double and Nyesha Wright had a walk and scored a run.

Kennedy Fashner earned the win throwing 4.2 innings allowing four hits, striking out five and walking one. Grace Shaffer picked up the save pitching 2.1 inning in relief giving up two hits, striking out three and did not walk a batter.

In the night cap playing as the visitors, the Lady Wave jumped out to a 4-0 lead in the top of the first with Gilbert taking a game opening walk, Shilt legging out a bunt and a misplay on a Fashner fly ball scoring Gilbert for a 1-0 lead.

Back-to-back Lady Jackets errors had Mayo-Behnken reaching first and Shilt and Fashner scoring to give Greenville a 3-0 lead with no outs. The Lady Wave used a Petry sacrifice fly to left to make it a 4-0 lead with Sidney coming to the plate in the bottom of the first.

The Lady Wave added a run in the top of the second using a Sowry leadoff single to left, a Gilbert double to center and a RBI fielder’s choice off the bat of Shilt giving LWSB a 5-0 advantage.

Using a one out Fashner walk, a two out Courtney Bryson bunt single, a Petry single to center loading the bases. Fashner raced home on a wild pitch scoring Greenville’s sixth run of the day.

A Davidson two out sixth inning Davidson single to right field scored two Lady Wave runs to give the Greenville girls an 8-3 lead with Sidney scoring a single run in the bottom of the inning to make it an 8-4 score that would hold up for the final score with Shaffer setting the Lady Jackets down in order in the bottom of the seventh.

Fashner picked up the win pitching 2.1 innings allowing three runs on two hits, one walk and one strikeout. Gilbert earned the win tossing 4.2 inning out of the bullpen giving up one run on six hits while walking one and no strikeouts.

“Today, two games and both pitchers split it,” Newland stated. “When you add it up together they spit. They each got 21 outs in two games. Sidney is a scrappy group, they started out rough and they won eight of their last 10, played Miamisburg the other day 3-1 and run ruled a couple teams we didn’t. I was just happy to get the win and move them past us.

Baylee Petry paced Greenville in batting going 2-2 and a RBI, Mayo-Behnken was 1-4 with 2-RBIs and 2-runs and Natea Davidson went 1-3 with 2-RBIs.

“Tonight Baylee Petry steps up with a couple big, big hits,” said Newland. “I’m just proud of both of those kids (Petry and Davidson) because they are both kids that hit first and to have them both coming on and where we are at – just love what we’re doing.

Lani Shilt was 1-5 with a RBI and a run, Morgan Gilbert 1-4 with a double and a run scored and Kennedy Fashner had a walk and 2-runs.

With a long string of Conference title behind them, Coach Newland understands the attention the Lady Wave gets each year at this time.

“Tt’s a big one,” Newland said of the bullseye on the team’s back. “That’s why I’m proud of the program and the kids. They’ve built that. I still don’t have a hit. I haven’t done anything except put kids in positions to win and lose a lot of friends, but my job is to play the kids that are that are the best positions to win for Greenville High School and the Greenville City Schools and I am very proud of that.”

With the Monday night wins, Greenville improves to 19-2 overall and 14-0 to close out conference play. 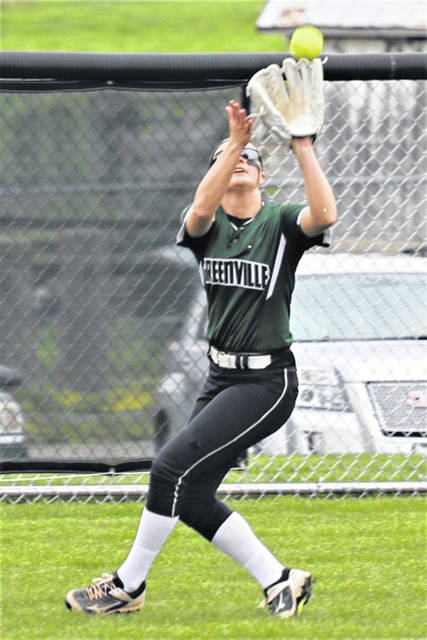 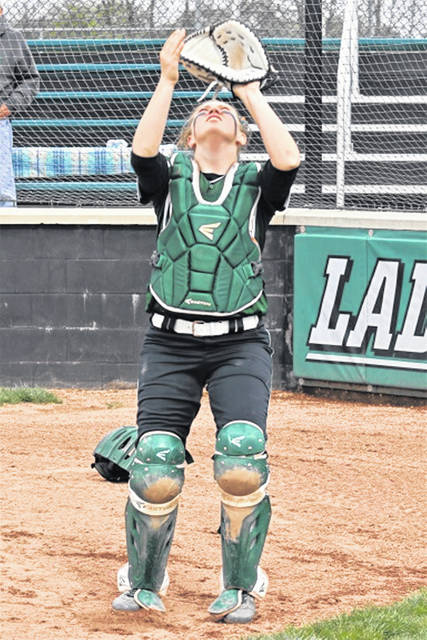 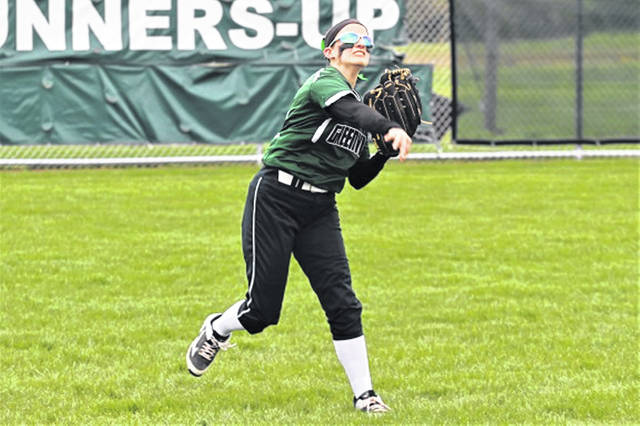 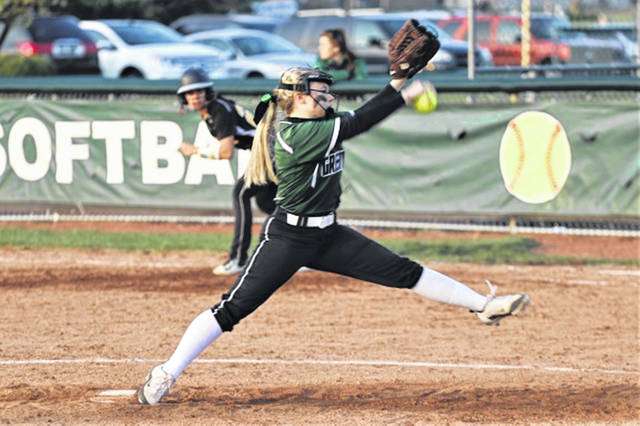 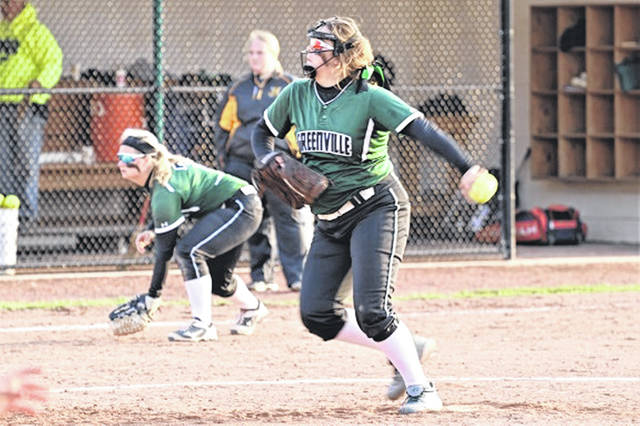 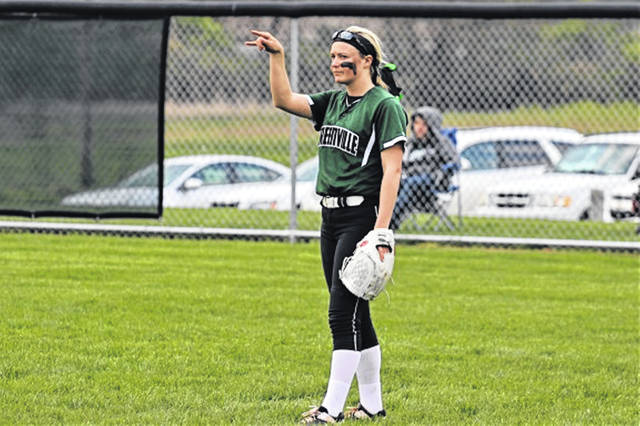 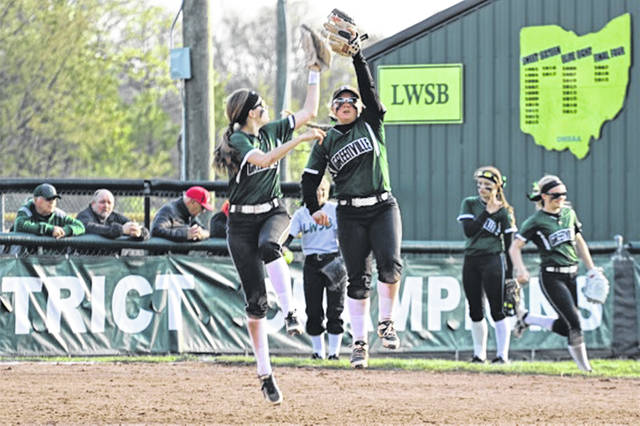 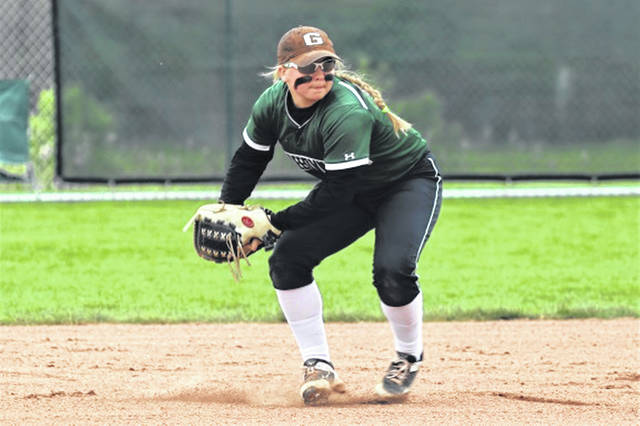 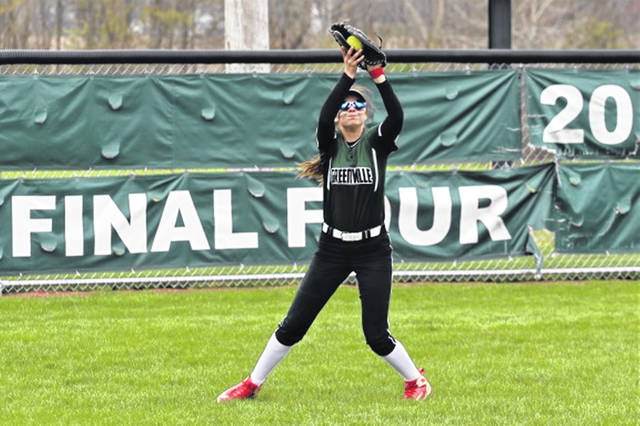 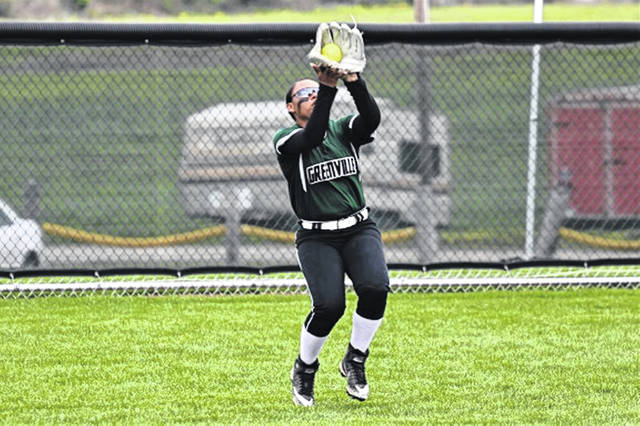