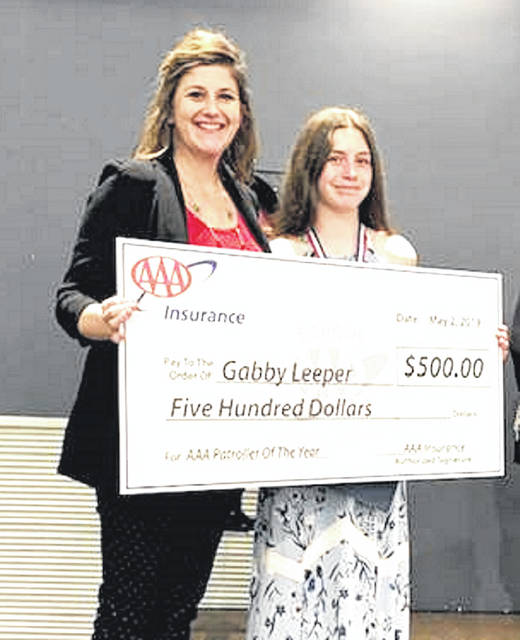 On May 2, Leeper learned of her award during the AAA Patroller of the Year banquet at the Dayton Convention Center.

A press release submitted by the AAA stated: “An honor of the highest regard, this award recognizes exemplary leadership qualities, safety skills, school involvement and citizenship/volunteerism.”

Leeper said she was not aware until it was announced during the banquet that she had been chosen as the Saftey Patroller of the Year.

Leeper, 12, said earning the award was “shocking. I was surprised.”

Leeper said she was nominated by her safety patrol adviser, Leslie Rhoades. Nominees were asked to write a paragraph about their service. The submissions were reviewed by the selection committee.

A safety patroller for the past three school years, Leeper said it was her sister Mercedes, now a 7th grader, who encouraged her to join safety patrol.

“My sister liked doing it because she always got to help the kids out. She told me about it. I really like it,” Leeper said.

Some of Leeper’s duties include taking down the flags and placing them correctly in their boxes, helping students board buses and cross streets surrounding the school, and help open school doors.

Another responsibility, Leeper said, is to make sure students put the playground balls away correctly in their bins.

“When they do, we reward them with candy,” she said.

Elementary Principal Ashlee Fourman said Leeper was “a very responsible student. I had Gabby when I was a first grade teacher, so I’ve known her for a long time. She’s a very sweet kid, very helpful. She fills in for the student patrol captains when they are not here. She gets along well with her peers.”

Ansonia Safety Patrol has 68 students in grades 4, 5 and 6 who participate in the safety program.

“The recipients of this award are committed to leading others in a positive way, and build on this strong foundation to become talented leaders across many fields and professions,” said AAA Public Affairs Manager Cindy Antrican. “This year’s winner exemplifies all the qualities of a true leader.”

AAA awarded Leeper a recognition plaque and a $500 check during the May 2 ceremony.