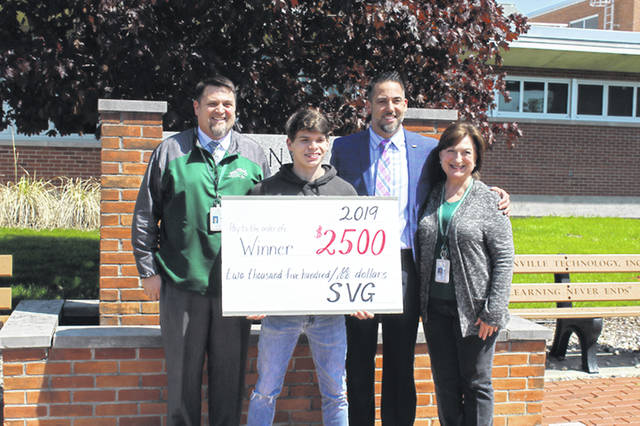 GREENVILLE – Greenville Senior High’s annual After Prom was once again a success. The event is separate from Prom and is an attempt to keep students safe and have fun after Prom. The activity is sponsored by the school’s senior class and the GHS SADD Club. This year’s After Prom was held at Greenville High School from 11 p.m. until 2 a.m.

Part of the allure of After Prom is the many prizes students can win by being in attendance. All students with an After Prom ticket were eligible, but must be present to win. Only GHS students were eligible to win the grand prize. This year’s grand prize was donated by SVG Motors, particularly SVG Chevrolet and SVG Chrysler Dodge Jeep Ram, both in Greenville. On Monday, Steve VanGorder, president of the company, came to the school to present a check for $2,500 to senior Justin Mullins. Mullins’ name was drawn by SVG employee Tim Hodges at the conclusion of After Prom. Also attending the event from SVG Motors were Alyson Hardy and Alex Stewart.

VanGorder explained why he supports Greenville’s After Prom, “I want to either help a student get to school in a new car or go to school with a financial head start.”

VanGorder has donated cars as door prizes for the GHS After Prom event for the last three years, but decided he wanted to go in a different direction this year.

In addition to SVG’s donation, over $1,000 in other door prizes were given away throughout the evening. The senior class purchased $1,000 prizes with class funds and many local businesses donated gift certificates and food and refreshments for After Prom. Domino’s Pizza provided pizza and Dairy King gave ice cream.

Also, in the example of the spirit of giving set by VanGorder, the Class of 2019 is making a donation of $300 to the Cystic Fibrosis Foundation on honor of Steve’s wife, Kelly VanGorder, who has had CF since childhood.